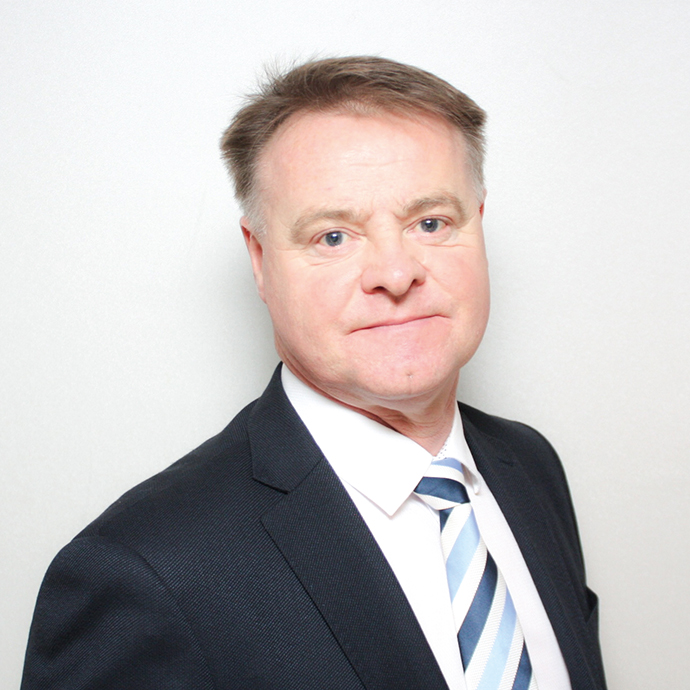 Leaving school with 8 O-Levels in 1980, Ken admits he had no burning desire to pursue a career in construction. While he enjoyed working on site during the school holidays, making teas and coffees for the workmen, he recalls being on the receiving end of tradesmen tricks.

“I was sent for everything – the long stand, the glass hammer, tartan paint, you name it!” he said.

His father, a charge hand joiner, encouraged Ken to take up a joinery apprenticeship when he left school, but the idea of earning and learning did not immediately appeal. Ken was young, and more interested in short-term gain than long-term investment in himself.  So he started working as a labourer, earning £80 per week as opposed to the £24 a week an apprentice might take home.

Ken’s first job in construction was with H&J Martin, labouring on the site of the Wellington Park Hotel in Belfast. Eighteen months into this job, Ken was laid off due to a shortage of work.

Ken’s first break in construction came when labouring for Bellisle Building Company based in Dromore, Co Down, under Site Manager Charlie

Watson. From the outset, Charlie recognised Ken’s potential and gave him the opportunity to read plans and supervise sections of the external works.

Taking on more responsibilities, under Charlie’s watchful eye, Ken was exposed to many more duties than the average site labourer. With this experience, Ken’s confidence grew. After six months working as a Ganger, Ken was promoted to Foreman on the build of Euro Flowers on Boucher Road.

He worked at Bellisle for nine years before moving on to RG Coulter and Co with the aim of further career progression. Here, Ken recognised the value that construction-specific qualifications could bring in climbing another rung up the career ladder.

Ken pursued his Site Management Studies through the CITB NI, undertaking his Certificate then his Diploma from 1992 to 1994. Ken credits Allan McMullen, former Chief Executive of CITB NI, with being his biggest career mentor.

“Allan has been absolutely instrumental in fast tracking my career through a focus on continual professional development,” Ken said.

Reflecting on his achievements at Heron Bros, along with the countless legacy projects delivered throughout the UK and Ireland, Ken is proud of the role he had in the CIOB, promoting the status of Chartered Building Company, which the company has held since 2010.

Ken has been instrumental in the growth of the operational structures within Heron Bros, with a focus on training and personal development.

“We have a very strong Operational Team in place who I believe have respect for my guidance and experiences. Having a mentor can have a dramatic impact on your progression, personally and professionally. I was fortunate to have two fantastic mentors who have helped shape my career. I can only hope that I can provide my team with similar guidance and support.”

As a Fellow of the CIOB from 2012, the organisation is very close to Ken’s heart. Heron Bros broke CIOB records in October 2016 when seven of their employees were conferred as CIOB members. Never in Ireland had so many members from one company been conferred in the same ceremony.

Heron Bros will have six more candidates graduating in October 2017 and five engineers working towards MCIOB through the PDP route in 2018. Such success coupled with achieving Platinum Investors in People accreditation (the first UK construction company to do so), clearly demonstrates that Heron Bros is at the forefront of people management and development.

“The CIOB has opened many doors for me through the attainment of professional qualifications and the commitment to Continual Professional Development. At Heron Bros, we encourage and support staff to continually develop and progress as professionals. By becoming Chartered CIOB members, our employees keep their job knowledge and qualifications current and up to date and they commit to abide by a strict code of ethical conduct.

“My message to young people is that you do not need to take the traditional educational route to have a successful career in construction. Now that is not saying that education does not have its place – it is just not the only path. When experience is married with ongoing CPD, it can present fantastic opportunities for development.”

With the industry moving at a faster pace than ever in terms of modern methods of construction, legislation and technology, it is essential that professionals keep up with changes for the benefit of the public, their employers and clients. The CIOB is now considered the leading professional body in construction management and leadership.

Ken Whan FCIOB is a Fellow member of the CIOB, and is Operations Director at Heron Bros.
He can be contacted on [email protected]

For more information on the CIOB, contct Karen Menagh on 01344 630847, e-mail [email protected] or visit www.ciob.org

Van insurance quotes increase by a third in ‘quiet’ month of...