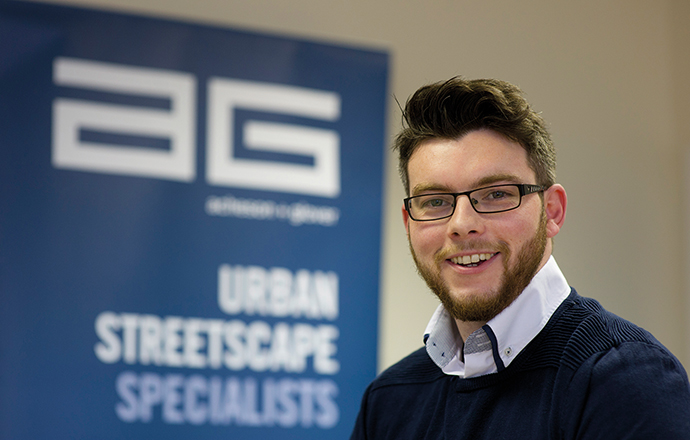 The plucky 30-year-old from Castledawson had his sights set on the glamorous world of sports’ coaching before joining Acheson & Glover (AG) as a 20-year-old.

Although not quite what he’d set out to do, it was a somewhat familiar environment for him as both his father and brother were employed by the family-owned firm that has been enjoying success throughout the UK and Ireland since undergoing major changes brought on by the recession in the late 2000s.

“Upon leaving school I had spent a couple of years doing sports excellence and performance in Ballymena with a view to going into coaching or teaching. I had also spent six months coaching soccer in Boston and had considered the possibility of enrolling at Liverpool John Moores University to pursue what I thought was an inevitable journey towards a career in sport.

“But when the opportunity came to earn some money and get into regular employment as a General Operative at Acheson & Glover’s Magherafelt plant I jumped at it. That was 10 years ago and I guess you could say I haven’t looked back since,” David explained.

“From day one I loved the culture of the place. I felt I knew the Chief Executive, Raymond Acheson, even before I started working there as my dad and brother spoke so highly and often about him. It was hard work – from 6am to 6pm – but it helped me develop a sound work ethic and a love for the company.”

Spells as a Sales Advisor in AG’s Dungannon and Toome-based Outside Rooms were followed by a move into commercial sales where he began serving local construction companies interested in purchasing anything from AG’s high-end paving and walling to more complex segmental retaining walls or value-added products like acoustic blocks.

“This was clearly a very different challenge from selling to domestic consumers, although I find the basics of sales are similar no matter to whom you are selling. For me, it’s all about knowing your customer and how you can meet their needs. At AG we’re fortunate to have an excellent range of innovative hard landscaping solutions that I know we can sell with confidence.”

After two years working within Northern Ireland, David took up a new challenge from the beginning of April, working with many of those large construction companies – but this time serving their needs in GB.

“It’s no secret that our top eight or nine construction companies in NI secured something in the region of a billion and half pounds of work in GB between 2014 and 2015. That’s a major opportunity for AG as we believe we have a lot to offer them as they seek to grow their footprints in Britain.”

Speirs believes his new role is unique – and reflects the investment AG makes in building strong and sustainable relationships with its business partners.

“As a business we are known for our agility, our responsiveness and the ease with which people can do business with us. Our goal with any customer is to add genuine value and to make life easier for them.

“I believe having a ‘go-to’ person at AG for our large local construction companies will be a real value-add and help to them as they compete for and deliver projects large and small in Britain.

“In keeping with our company way of doing things, my approach is all about providing the personal touch, helping our customers overcome obstacles and giving them excellent levels of customer service.”

For more information on AG you can log on to www.ag.uk.com