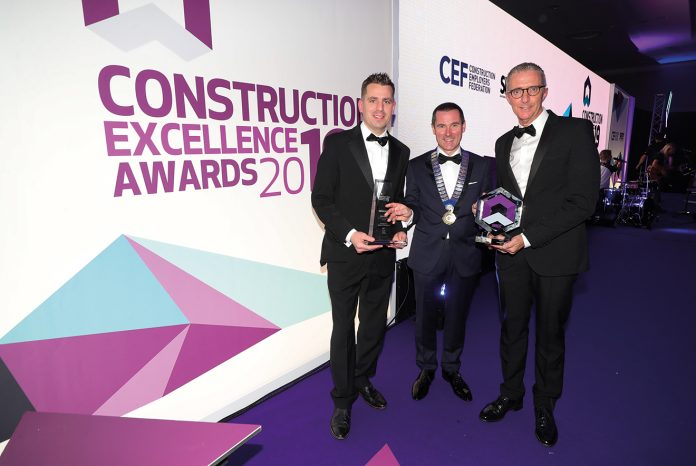 GRAHAM was declared the ‘Overall Winner’ for its work on the Grand Central Hotel at the Construction Excellence Awards 2019, held recently at the Crowne Plaza Belfast. The company also won the Commercial Construction Award for the £53million iconic four-star hotel while another much deserved GRAHAM project, the Acute Mental Health Inpatient Centre in Belfast City Hospital, was named the best Health Infrastructure Award.

Commenting on GRAHAM’s overall win, Federation Managing Director John Armstrong said, “GRAHAM’s work in delivering the £53million project is an excellent example of how our local construction industry is pivotal to the development of so many important projects across a wide range of sectors in Northern Ireland each year.

The judging panel was particularly impressed with how GRAHAM dealt with a number of unforeseen issues during construction, including a requirement to hand over three months earlier than an already challenging completion date.

Additionally, there were no reportable incidents, with over one million man hours worked. The delighted client has a magnificent building that has transformed Belfast’s skyline.”

Now in their 20th year, the Construction Excellence Awards continue to go from strength to strength with this year seeing a record number of over 150 entries across all 16 categories.

For more information on the Construction Employers Federation, visit www.cefni.co.uk