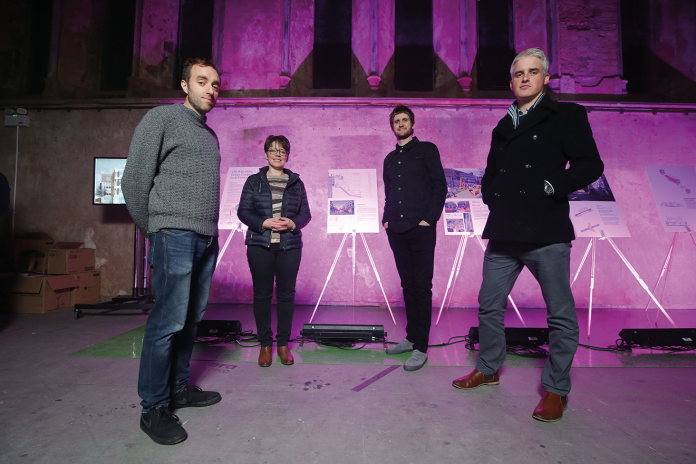 At the annual Architecture Night celebration, held this year in Carlisle Memorial Church, in north Belfast, the winners of the RSUA/JP Corry #MyBelfastIdea Design Competition were announced to a diverse audience of architects, leading figures from the built environment sector, and a wide range of key influencers.

The winning design, entitled #BelfastMagnets and by Robert McCluskey and Darragh Collins, was considered by the judging panel to have responded imaginatively and creatively to the brief, which was set in the wake of August’s devastating fire at Bank Buildings/Primark in Belfast City Centre. Participants were set the task of generating ideas for a temporary intervention or interventions to the built environment which would help attract people to the surrounding area. In particular, the judges highlighted the careful consideration #BelfastMagnets gave to the space in Royal Avenue.

The potential uses which would draw footfall back to this central commercial area included street art, a stage with an “art wall”, and a unifying people friendly design for the street surfaces.

The annual Design Competition, now in its third year of a partnership with builders’ merchants JP Corry, is focussed on early career architects (defined as being within the first 15 years of their career). This year, given the challenges facing Belfast City Centre, both RSUA and JP Corry felt that this competition should address this urgent, topical challenge and demonstrate what role architecture can play in helping to respond quickly to major events like this.

The timeframe for submissions reflected the urgency of the situation and was deliberately short. RSUA was pleased to receive such a wide range of submissions both from individual architects as well as from several collaborative endeavours. These entries were selected for display at Architecture Night by a panel of judges comprising of architects, conservation experts, statutory partners and specialists from the wider built environment sector.

The breadth of designs gave viewers a sense of the quality of the profession’s collective response to this current challenge and of the imagination and talent of early career architects from across the island of Ireland. Speaking after the event, Joan McCoy, RSUA President, said, “While design competitions will be familiar to architects the judging panel recognises that this was a particularly challenging brief and I want to thank everyone who has participated.

“The quality of entries shows that architects have responded with creativity and imagination to the dreadful fire at Bank Buildings and produced visions which challenge us to re-imagine what can be delivered in urban contexts. We know citizens benefit from well-designed public spaces; the #MyBelfastIdea Design Competition shows that architects have reflected not only on how our cities should look, but also who they should serve.

“The ideas and passion for design in the submissions is evident, and the winning entry will be used to generate debate and to engage decision-makers about how to address the challenges in Belfast City Centre.”

Chris Mc Comb, JP Corry Specialist Sales Manager commented, “The #MyBelfastIdea competition is a brilliant example of the role Cutaway of the #BelfastMagnets stage within an art wall. architecture plays in responding to the challenges facing Belfast city centre. This competition gets more difficult to judge each year, with the calibre of entries continuing to be outstanding. The panel of judges were truly impressed by all submissions, and I would like to congratulate Robert McCluskey and Darragh Collins on their winning design.”