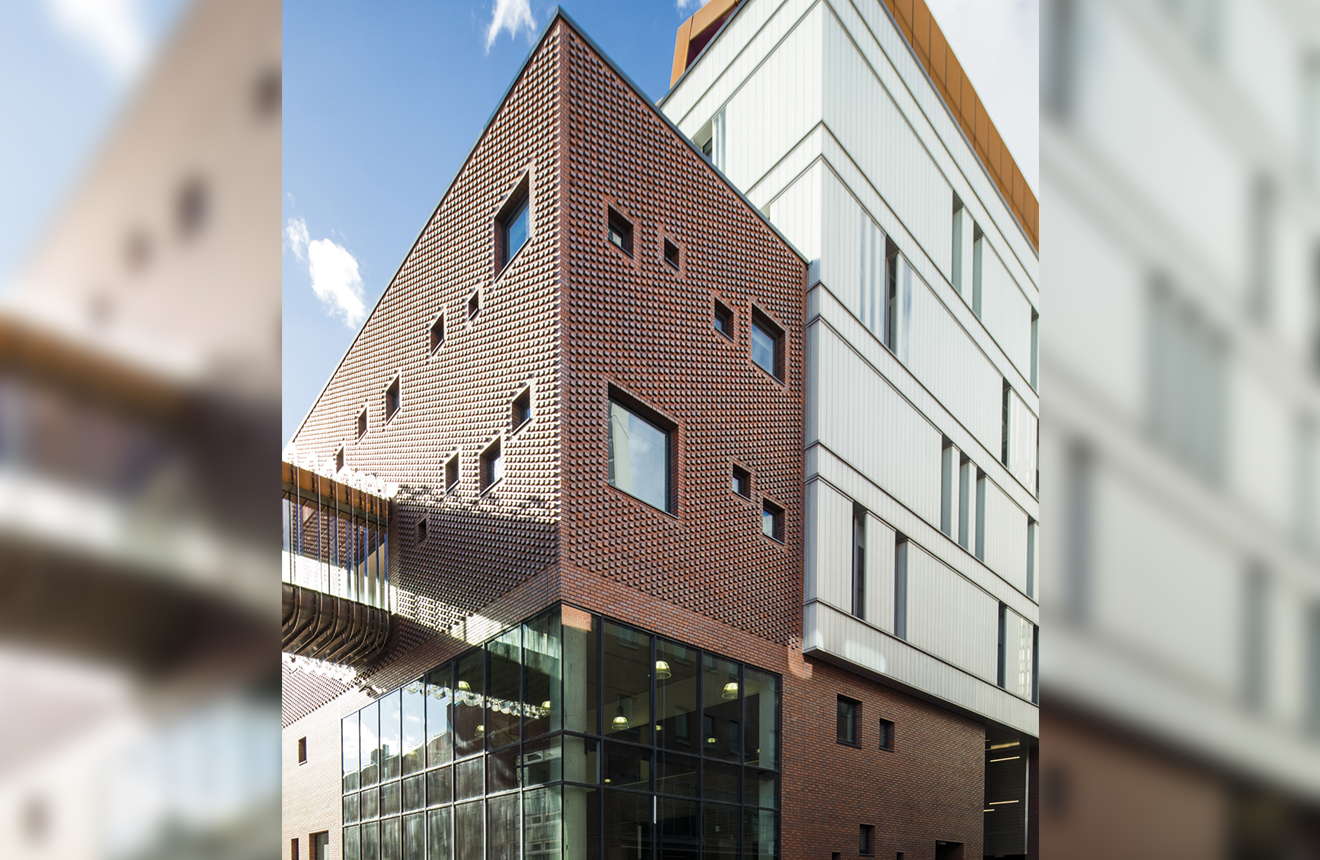 Sheffield Hallam University is undergoing something of a transformation at the moment.

A phased scheme of projects is revitalising the campus and creating a new aesthetic around the University, one which doesn’t undermine the existing buildings on campus but rather seamlessly blends the old with the new. Sheffield Hallam University’s Faculty of Development and Society is one of the most recently completed projects on campus. A new build of approximately 9,500 sqm, the brief to Bond Bryan Architects was to create a landmark building that would encourage innovative forms of teaching and learning. The idea of context was extremely important with this project; the new build would sit within the Cultural Industries Quarter in Sheffield and adjacent to the Grade II* Listed Butcher Works.

The existing brick on the adjacent listed building was a key starting point for the architects when it came to the design. Bond Bryan decided to create a contemporary reflection of the brick on the listed building and utilised a pattern of projecting headers with single and double cant brickwork to create depth and address scale and massing.

The Forterra Dark Multi Smooth brick was specified for its durability and robust qualities and also for its particular aesthetics which reflected the traditional red multi-brick appearance of the adjacent heritage buildings. Quite early in the process, Bond Ryan worked alongside Forterra to look at the various practicalities with the shapes that formed the patterned detailing. This helped the suppliers to manufacture the optimum bricks which would help to achieve the required appropriate distinction in the details. A notable feature of the brick is the single and double cant special shapes that form the diaper patterns. These are a slightly darker shade in order to pronounce the detail, a feature that was made possible by ring bricks independently in supplementary “shuttle” kilns away from the main “tunnel” kiln which res the standard facing bricks.

The project’s brickwork is a key focal point of the new building, as is the atrium space which uses the trace of Brown Lane as an urban design driver and acts as a showcase and the social heart of the project. Two flexible teaching blocks have been positioned either side of the lane at a high level, opening out to showcase the educational and social facilities at ground level. The building was topped off with a unique roofscape and roof garden to reflect the historical significance of the site, thereby creating a ‘landmark’ within the city. Finally, the existing Arundel building has been linked to the proposed Charles Street building education departments via a bridge link. The result is a stunning, highly effective concept that reflects the new and old of industry. The resultant building is one that integrates the old with the new without trying to conceal the merits of each while creating a binding theme through the entire project.