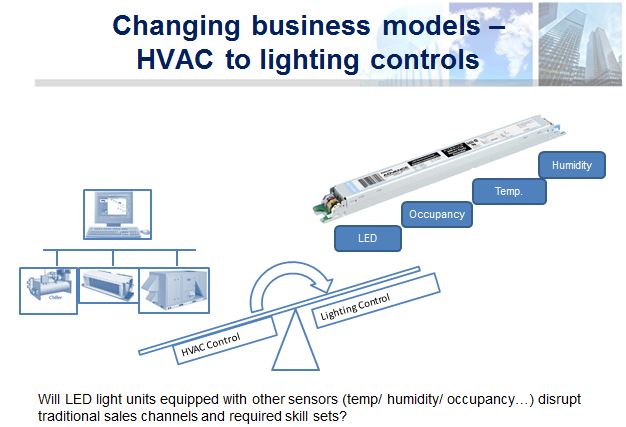 However, new technologies, innovations and innovative business models are already disrupting the traditional BACS business. Findings show that the BACS market continues to be led by a few dominant global players, while others are strong in certain regions, or in niche segments. However, the business of all of these could be significantly impacted by the tech giants such as Google, Apple, Microsoft – as they are already ‘players’ in the market.

BSRIA’s manager for energy and smart technologies, Jeremy Towler, said: “A new connected, smart, LED lighting market is beginning to emerge which will see a change in the balance of ‘power’ within the building, moving from a building controls centric to a lighting centric form of building automation. The new generation of lighting controls will offer increased support for mobile access and personalised control solutions which will drive the building to respond to the individual.

“This is in stark contrast to the classic experience where individuals have been forced to adapt themselves within the limited scope of the ‘traditional’ building automation systems. Not only does it signal a move away from the mechanical ‘wet channel’ towards the electrical ‘dry channel’ as the route to market, but it also means that an increasing proportion of the controls will arrive on site as part of a ‘packaged’ pre-tested solution.”

Traditionally, BACS has mainly been applied to larger, more prestigious buildings and the mid-scale market has represented a missed opportunity. Now, several suppliers are offering scalable solutions which are typically based around mesh networks and offer easy scalability.

While most of the impact of home automation has been limited to the upper end of the residential market, suppliers have also been targeting their solutions at the ‘lighter’ end of the commercial spectrum in small-to-medium sized buildings. And although the homes market is still quite regionalised, global players are starting to emerge.

Even though the cloud is increasingly seen as the most cost-effective means of providing BACS software, cybersecurity concerns remain. However, notable companies are rising to the challenge as they realise this is one of the biggest potential threats to the growth of the Internet of Things (IoT). The IoT is starting to change the focus of BACS systems from a more centralised / proprietary model to a more open and collaborative one. However, some data processing is more efficient if carried out locally, and this is fuelling the rise of localised ‘fog computing’ and ‘edge computing’.

Jeremy added: “As building automation becomes more information-based, so the demand for sophisticated Building Energy Management (BEMS) software is growing at double figures, in the form of targeted applications, energy management and sophisticated analytics to identify areas for improved performance. Increasingly, analytics need to be capable of handling ‘Big Data’, as building systems generate ever greater data volumes. BACS suppliers need to be proactive in this area or risk becoming commoditised and marginalised.

“While energy cost remains the biggest single driver, there is raised interest in employee comfort and the potential productivity gains resulting from a better work environment.”

BACS are applied to a wide range of solutions and equipment, including air-conditioning, heating and renewables. These are substantial markets offering growth and there are more opportunities for companies capable of expanding into these sectors.