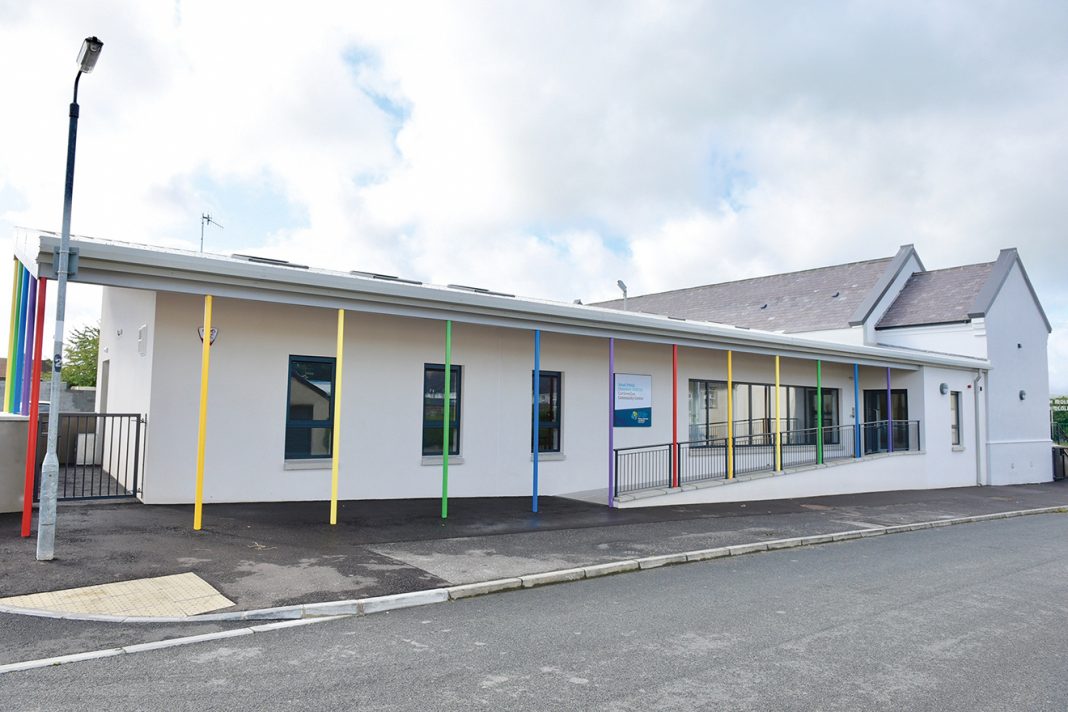 Based in the town and with many of its workers coming from the immediate area, there was a real connection between the team from McGrady Contracts and this historic building.

“A lot of our workers attended the old primary school which was situated in the building and my own three children went to the nursery school as well,” said McGrady Contracts Director, Damien McGrady.

“The building is less than 500 yards from our office, so with all this connection this was a tender we wanted to secure.”

This was the first time the company successfully tendered for a project with Newry Mourne & Down District Council. “We knew the job would be going to the lowest price so we made sure we were very competitive indeed – this was a job we were determined to get,” said Damien.

“We are delighted with how the building has turned out, it will be lasting legacy in the heart of Castlewellan for McGrady Contracts. Everyone who worked on that building for us is proud of the finish – just last week I was training on the pitch nearby and couldn’t help but look across and admire how it has turned out.

“Another pleasing aspect has been how the new building has been received by the community in Castlewellan. There has been a lot of interest in it and it is great that we have been involved in something that will serve this community for future generations.

“As the job was on my doorstep even when I was on my way to somewhere else I could call and have a wander round and see how it was progressing.”

McGrady Contracts has been in business since 2012 but became a limited company in 2014. It has been involved in building nursing homes, social housing and latterly the community centre in Castlewellan.

There may have been times on the community centre project that Damien, in tendering for the job, could have been accused of letting his heart rule his head. “There was a lot of demolition work especially to the rear of the building and this was very challenging indeed,” he said.

“The plan was to retain the front façade but as we progressed with the demolition we found a lot of unforeseen issues which needed contractor-led changes.”

The plans included the complete removal of the roof but when it was stripped back Damien discovered beautiful pitch pine beams which he felt should be retained.

“It took a lot of negotiations with the council and with the engineers but the decision was made to keep the beams. This delayed the programme a little bit but I was sure keeping the beams was the right thing to do especially as they were in good condition. I was pleased the council agreed and I have to say the council was excellent to work with throughout the project.”

Once the demolition work was completed work progressed at a steady pace. The foundations for the new extension were dug and building work got underway. The plan was to build the new extension without touching the retained front portion of the building as there were fears it could literally crumble if not supported correctly.

“We really didn’t want to take the chance with it,” said Damien. “We got the new building up and then began working on tying the two sections back together again.

“It wasn’t the easiest project to be involved in and there were certainly a lot of learning outcomes for us but it was also one of the most rewarding contracts we have completed.

“We are currently finishing a project to build 34 social housing homes in Castlwellan which coupled with the community centre has brought a lot of satisfaction to our team.”

Like so many of the companies involved with the development of Castlewellan Community Centre, McAleenan Architects + Interior Design has a special connection to the building.

Director, Bernard McAleenan, who is originally from Castlewellan, attended primary school which was once located within the former National School building on the site.

“I was engaged back in 2012 by the Castlewellan Community Partnership to design a more modest refurbishment and extension of the existing community centre building. During the brief development stage the job developed into the much larger three-phase project which is ongoing today.

“I am proud to have designed the complete modernisation and extension of this key community building within my home town” said Bernard.

McAleenan Architects + Interior Design has now completed the design for the entire building through to planning approval stage, with the first phase having been completed recently.

“Having attended school from P1-P5 in that building, it was certainly an interesting project to be involved in,” said Bernard.

“It was nice to get back into the building and to be able to bring it up to modern standards as well as adding some complementary architecture in the form of the new extensions. It’s now a building which will serve the community for years to come.

“I have to pay tribute to the Community Partnership. They had a real passion for the building and a desire to keep it in community use.”

Phase one of the project was the refurbishment of the former school building and extension for the nursery school, phase two will see the development of a sports hall, while phase three will see the delivery of sports changing areas and gym facilities. The portfolio of projects at McAleenan Architects + Interior Design comprises bespoke home design including traditional house design, contemporary house design and house extensions as well as commercial design projects.

The company, which has offices in Armagh and Warrenpoint, welcomes all project types and sizes. So, whether your project is a small refurbishment to an existing home or other building or a large-scale development, McAleenan Architects + Interior Design will work closely with you to fulfil your project’s needs.

Patrick F. O’Reilly Ltd was proud to have been the painting contractor on the refurbishment of Castlewellan Community Centre.

“The community in Castlewellan has an old bespoke building which has had new life breathed into it,” said Paddy O’Reilly. “It will be a wonderful facility for the whole community and we were very pleased to have played our part.”

The team from Patrick F. O’Reilly’s completely re-painted the inside of the building in a water-based eggshell colour finished to a commercial specification which will have a more durable finish. The end product is a bright and airy building.

Meanwhile the outside of the building was coated in KEIM paint due to the lime render used on the outside of the community centre. KEIM paints not only offer beautiful flat matt mineral finishes but, as well as being extremely durable, offer a high degree of protection to the underlying substrate.

“We were really pleased with the end product,” said Paddy. “The standard of work was very high as was the attention to detail and we were pleased to be able to work once again with McGrady Contracts.”

Patrick F. O’Reilly work across the island of Ireland and throughout the UK on a daily basis operating in multiple sectors simultaneously.

Elite Plumbing Heating & Gas Ltd was proud to carry out the mechanical work at Castlewellan Community Centre and nursery.

The Castlewellan-based company even took it upon themselves to upgrade the sanitaryware throughout the centre at their own expense as a mark of its commitment to the local community.

Elite prides itself on being an enthusiastic, modern and hard-working company which loves rising to a challenge. And the combination of existing building and new extension at Castlewellan Community Centre certainly presented a few challenges for the team as a number of services crossed over between the two buildings. Underfloor heating was installed throughout, with a mechanical ventilation heat recovery system in the community hall and a smaller version installed in the nursery. Elite also installed extraction ventilation in the toilet area, gas boilers in the two plant rooms and unvented hot water systems.

This was all managed via a building management system which was essentially two systems due to the two separate buildings although Elite was able to link the systems.

Elite Operations Director, Conor McCann paid tribute to the work of the company’s Contracts Manager, Shane McCann and the team at Elite which he said worked very well with the contractor, McGrady Contracts and the electrical contractor, WKK Electrical Services.

The job included preparing the grounds as well as providing a tarmac surface to the carpark and asphalt finish to the footpaths.

PM Contracts carried out demolition work and groundworks at the newly refurbished Castlewellan Community Centre. The groundworks included sewers, drainage and kerbing while the demolition work to the rear of the building provided a number of challenges.

The front façade of the stone building was to be retained making the demolition of the rest of the building less straightforward. However, PM Contracts delivered an excellent finish. Living within walking distance of the community centre, the project brought a great sense of pride for Peader McGrady.

Castlewellan Community Centre has a special connection with the family-run business as Director, Sean McCrickard’s father, Bernard attended the former primary school which was located in the building.

Castlewood Joinery completed all of the internal joinery work at Castlewellan Community Centre.

Internally they carried out all joinery work including doors, skirting, architraves and plaster boarding. Castlewood Joinery has worked with McGrady Contracts on a number of occasions.

“They’re a great firm to work with and we have a very good working relationship,” said Castlewood Director, Gerard Toner.