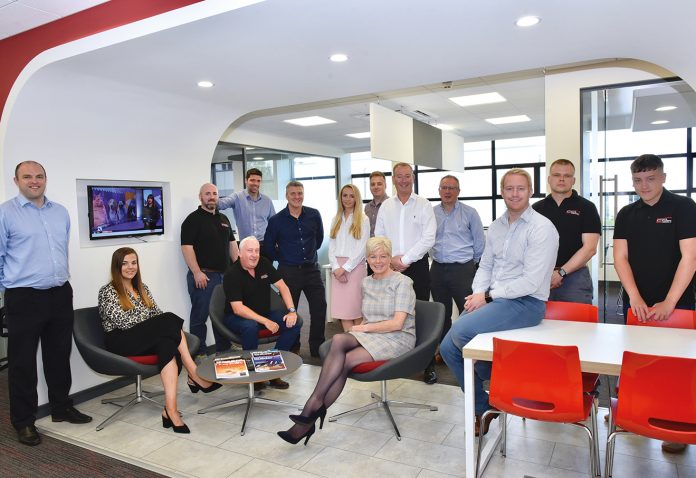 CCL Interiors Ltd is marking its 45th anniversary but instead of feeling nostalgic the Belfast company is looking to the future with bold plans for further development. The company has enjoyed rapid growth in recent years during which time it has had to move to new bespoke premises after outgrowing its former base.

And just over a year ago CCL Interiors put down a marker by establishing a regional base in Scotland with the opening of a Glasgow office.

“With the growth and success of the business in mainland UK and with a great proportion of that work being secured in Scotland, the natural progression for us was to open an office in Scotland. Our location was chosen in Glasgow near Charing cross as this gives us a good central base to cover Scotland and also good transport links between our headquarters in NI and the other sites where we operate in UK,” said CCL Interiors Managing Director, Andrew Montgomery.

“We opened it last June and it is already proving to be very successful.”

“The re-brand was very important for moving into new markets in mainland UK. With the name of Contract Ceilings Ltd , it was assumed by potential and new customers that we only carried out suspended ceilings, however with the diversification over recent years Suspended ceilings equated for less than 25% of our business revenue,” said Shaw Montgomery.

“Whilst we understood the need for a new name less specific to ceilings, we wanted to reflect our heritage therefore re-branded to an abbreviation of Contract Ceilings Ltd (CCL).” The company was established in 1974 by Shaw Montgomery senior as Contract Ceilings Ltd and over the years has built its reputation on providing a first- class service to the construction industry. It is now under the stewardship of Shaw’s sons, Andrew and Shaw who have taken the company to the next level.

Given the diversification of its service range and the penetration into new markets and sectors, Contract Ceilings underwent a rebranding exercise in 2012 to become CCL Interiors Ltd.

“The rebrand was very successful for us and something we needed to do to reflect the wider scope of the work we were undertaking and also to reflect the developments of the company,” said Shaw.

“We are very proud of where this company has come from and its development down through the years,” said Andrew.

Andrew has more than 30 years’ experience working at CCL Interiors. Andrew became Director in 1997 and since then he has helped successfully oversee CCL Interior’s business development and growth strategy. As a result of the continued success the company benefited from his Directorship.

Shaw Montgomery joined CCL Interiors in 2002 and has a wealth of experience in the construction industry. Shaw’s experience and expertise led him to be made Director in 2005. Since then Shaw targeted business growth in the UK mainland and as he had studied in Edinburgh he viewed Scotland as a key target due to existing contacts that he had made through his studies and also through existing contractors who worked both in Scotland as well as Northern Ireland. This is why we have grown to such a level in Scotland in particular.