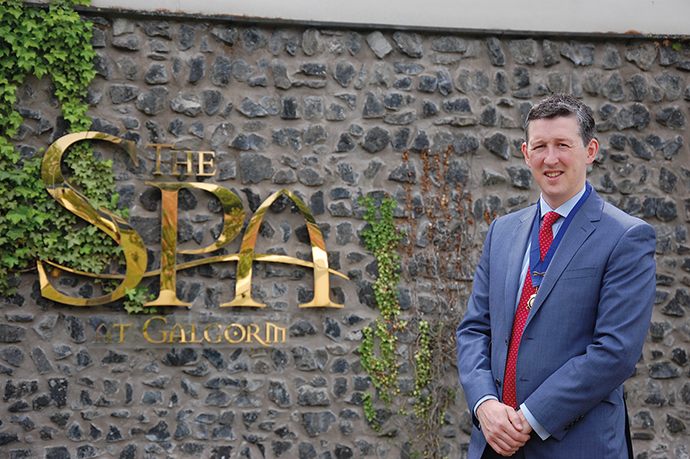 Gerard is someone who practises what he preaches and in his new role as Chairman of the CIOB Northern Centre he wants to spread the positive message about the benefits of being Chartered.

A Business Development Manager for Martin & Hamilton – which is a Chartered Building Company – the 37-year-old Dundrum native brings enthusiasm to the position, with plans to host more wide-ranging events that reach out to current members and, just as importantly, potential recruits.

“I am honoured to have been elected to this position and I am grateful to the members for putting their faith in me,” he said. “I am looking forward to the next two years and to building on the success of my predecessors.

“I am a big believer in what the CIOB stands for and the many benefits that Chartered status can bring to both companies and individuals and this is a message I am keen to convey within the industry.”

Gerard originally joined the CIOB as a student at Ulster University where he studied for a degree in Construction Engineering and Management. In later years he was Chairman of the CIOB’s Novus Northern Centre group before joining the CIOB in Ireland’s Northern Centre committee and becoming Senior Vice-Chair, and finally succeeding Mark Gilmore as Chairman following the election of officers in April.

“I really enjoyed being Chairman of Novus as it gave me the opportunity to see the next generation of Chartered members and what their expectations are within our industry. I’m hoping to bring this experience to my role as Chairman.

“Personally, joining the CIOB has made a difference to my career and I want to see others enjoy the same benefits. I have seen, first-hand, how companies and individuals have been able to use their Chartered status to secure a project. It’s a crowded marketplace and everyone is trying to differentiate themselves. Many hold the same accreditations and put forward the same views on areas such as sustainability, but being Chartered is one way for them to really stand out.

“When you are speaking to clients, they sit up and take notice of Chartered status. If you work with an architect or an accountant, you want them to be Chartered. You want a way for them to prove their credentials. It’s the same in any industry, and the construction industry isn’t any different. Being Chartered displays your professionalism and your integrity.”

Gerard added, “But it is not just a status that someone works hard for a couple of years to achieve, and then that’s it. Continuous Professional Development (CPD) seminars play a central role in improving the knowledge of our Chartered members and keeping them up-to-date with the latest technology and techniques.”

Gerard feels his time away from the construction industry working for major Ballymena firm, Wrightbus, gives him a different perspective, particularly into the challenges faced by many Northern Ireland companies now working beyond Northern Ireland. At Wrightbus, he worked on developing new markets in America and Europe and he feels that local companies should see working in Great Britain and Ireland as an obvious marketplace to be explored.

“That has been a real success story for the Northern Ireland construction industry and one I very much feel that we should build on. It showcases our quality and craftsmanship and the hard work ethic that is so prevalent in Northern Ireland. But it is a marketplace that we definitely should be developing more.

“In order to do that I want to see our members thinking outside the box and gaining insights from experts outside the construction industry. We’ve a broad church of members, with many coming from a technical viewpoint and others from a commercial mind-set. I’d like to see these members coming together more and benefiting each other. We face many challenges with BIM, procurement, PQQs and the increasing digitisation of our industry, but I think CIOB members are the best placed to tackle these issues head on.”