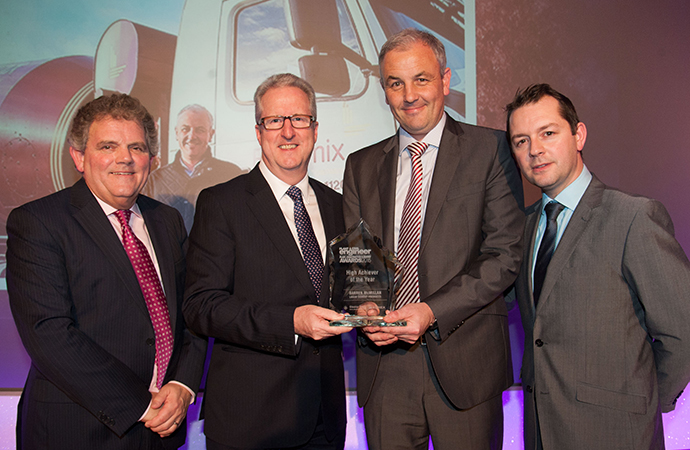 He was presented with the much coveted ‘High Achiever of the Year’ award, sponsored by Sleator Plant/Terex Construction, at a glittering ceremony at the Ramada Hotel in Belfast.

Darren has worked in the concrete industry for 25 years and has developed strong relationships with both customers and industry peers, which has been invaluable in achieving both business and personal development.

The awards judges praised him for his personal drive, passion and leadership skills which are well known across the Industry.

They also referred to his charitable works. In 2014, Darren identified an opportunity for his company and the industry to promote cancer awareness by painting two mixer trucks, one pink and the other powder blue, to highlight ‘Action Man’ cancer and ‘Breast Cancer’ campaigns.

With the support of his company and colleagues, they raised much needed funds for the local charity through many fund raising events which included marathon running, coffee mornings, bag packing, head shaving and this year their biggest event so far, a Concrete Truck Pull which took place in September at the former Maze Prison site in Lisburn. To date they have raised approx. £20,000 for Action Cancer.