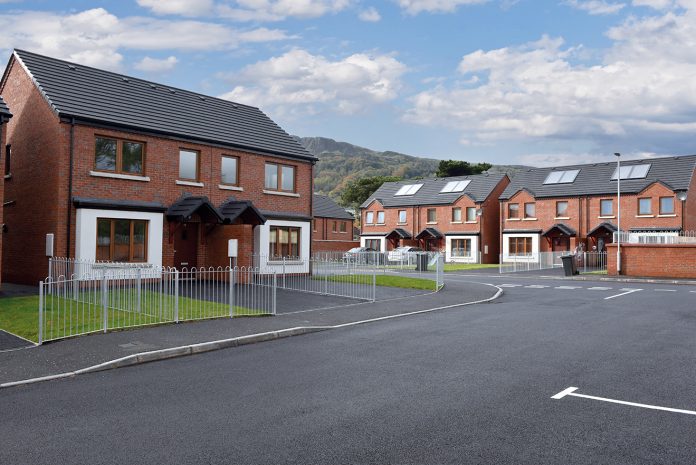 Over the coming months, the Department for Communities – and the wider Northern Ireland Executive – will lay out its long-term vision for housing through a new Housing Supply Strategy.

As a pre-cursor to this, we have called on the Executive to include a specific housing outcome in the Programme for Government.

While we await the final version of the PfG, it’s crucial that we begin to consider the detail that would underpin such an outcome and the means by which we deliver the type and quality of housing that Northern Ireland’s citizens need.

NI WATER
In our response to a strategy that will be allied to the Housing Supply Strategy, the Executive’s Investment Strategy, we have made abundantly clear that rectifying the wastewater treatment capacity issues that Northern Ireland Water faces must be the critical output of the coming 10-year ISNI.

While the wastewater capacity issues are now relatively well understood, their true impact – the number of new build houses they are currently holding up – is not.

Additionally, we are concerned that many believe that, with the publication and approval of the PC21, the issues will gradually abate over the coming six years.

However, in comparison with where we sat in the last financial year, NI Water needs to grow their capital budget from approximately £150m of the Executive’s full Capital budget to upwards of £300m in order to deliver PC21 – and this level will need to be achieved year-on-year for most of the rest of this decade.

While the construction industry is more than capable of delivering this, when we factor in all other infrastructure pressures, we must genuinely question whether the Block Grant can.

As the Executive is now prepared to have the discussion about the future governance and financing of the NI Housing Executive, ISNI must lay the groundwork for the same discussion with respect to NI Water, and it is vital that a new Housing Supply Strategy takes account of these issues.

PLANNING
The challenges facing NI Water are not the only major roadblock to housing development. Although not within the direct remit of a Housing Supply Strategy, the just completed review of the 2011 Planning Act by DfI is very important.

A more agile and responsive planning system for such applications is a key confidence-building requirement within the industry and we believe it is vital that the review reflects concerns that the current system is not fit for purpose.

SOCIAL HOUSING
Looking specifically at the social housing picture, along with others in the sector we are also strongly supportive of a move away from single-year budgets for new build housing association development.

However, given the recent statements of the UK Government with respect to the delayed CSR process, we are concerned that this may not come to pass until the first or second financial year of the next Executive/Assembly mandate.

Multi-year budgets across a suite of Executive capital expenditure are crucial as they will enable better long-term planning of resources and investment. They will also help the construction industry as the traditional year-end tendering process is not conducive to effective planning.

When we consider other reforms the Executive can take forward to stimulate housing, the industry strongly welcomed the statement from the Communities Minister last November with respect to reform of the landlord function of the Housing Executive.

Much like Northern Ireland Water’s infrastructure needs, we have long held the view that the maintenance needs of the 85,000 NIHE properties cannot be met through the Northern Ireland Executive’s capital budget alone.

Models like mutuals and co-operatives have a long track record of delivering sustainable levels of investment, based on borrowing, that stops far short of much more controversial approaches like privatisation.

This is, therefore, a solution which, like the delivery model for new build social housing by housing associations, is the best of both worlds as it retains the oversight and accountability of the NIHE by the Executive and Assembly but enables them to reach beyond the constraints, such as recurrent one-year budgets, of public sector expenditure.

Unlocking the potential of the NIHE’s landlord function in this manner will, therefore, be a significant boost to the local construction industry in terms of new work that would, otherwise, have been held up for many years.

RETROFIT
That new work must also extend to an ambitious retrofitting strategy (likely also as part of a new DfE Energy Strategy) that can deal with many of the challenges that our ageing housing stock faces.

Learning lessons from the recent failed approach in England, it is imperative that any new strategy is co-designed with industry – for example, the large number of firms that have undertaken NIHE stock adaptions/maintenance work in recent years – and has an appropriate level of incentive/de-risking from the Executive, to ensure it is delivered.

Such a strategy must also move in line with any reform of NZEB that is likely, as an initial uplift in current building regulations, this autumn.

CO-DESIGN
As this article shows, one of the key elements of a new Housing Supply Strategy must be its co-design not just with industry, the housing sector and those who own or rent homes but, crucially, a number of other Executive Departments and agencies where specific policy responsibility lies.

Bringing forward a strategy that does not have co-design at its core will mean it is unlikely that our industry can deliver the number of new houses, and retrofits of existing stock, that our citizens need and deserve.