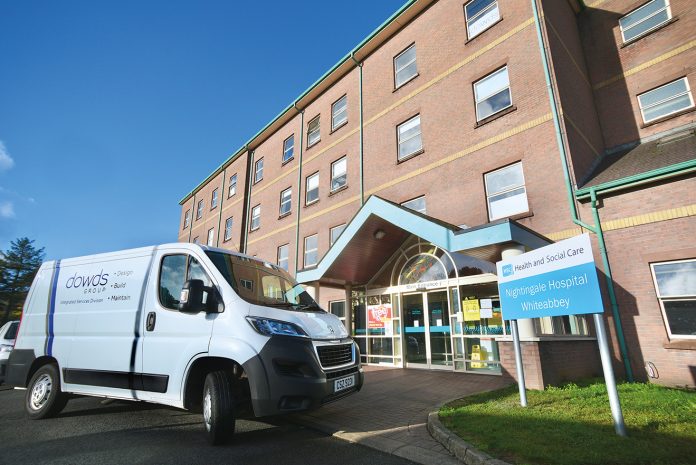 When the CPD identified Whiteabbey Hospital as the site for Northern Ireland’s second Nightingale Hospital they went direct to Dowds Group to deliver the main construction package.

Nicholas McKee, Construction Manager explains, “We were already on-site at Whiteabby Hospital and performing very well, so it made sense that as a build and M&E contractor we were further employed to complete the Nightingale wards.”

At the start of September 2020, CPD engaged with the design team and Dowds to discuss the fast track delivery of the Nightingale project to the people of Northern Ireland. By the end of the month, construction work had begun in earnest and the three Nightingale wards were handed over on December 4.

“The works necessitated completion to an exceptionally high quality on a live hospital site and one of the tightest build programmes we have faced,” said Nick. “It was almost a design and build as we went along, meeting with the design team two to three times a week just to keep up with the speed of the project. It was a very unusual way of building anything.

“We were stripping out the existing fabric and services at the same time as the design team were designing the new layout, so we were working very much hand in glove.”
With its dedicated build, mechanical, electrical and ventilation divisions, Dowds had all the specialists provision in-house to collaborate with the design team.

“We had already cemented good relationships with the engineers and architects on the design team which facilitated a very smooth process.”

The new Nightingale will generally cater for low acuity/step-down patients who are well enough to leave an acute hospital but who would benefit from a period of intensive rehabilitation.

However, the scheme has been designed and delivered to provide some flexibility to step-up care when and if required. In the immediate term, it will be managed as a regional resource to support the response to Covid-19, but in choosing to remodel an existing hospital facility it also provides a valuable longer-term asset for the provision of healthcare in the region.

As well as the tight time schedule, Dowds faced further challenges thrown up by working on a hospital site.

“We were working above a live ward,” said Nick, “which meant we had to work around certain M&E systems such as heating as it was being used in the ward below. We also had to keep all our site staff separate from the ward staff and follow Covid-19 restrictions strictly to minimise any possibility that we could bring Covid into the hospital.”

Commenting on the successful completion of the Nightingale project Nick said, “It’s a shame that this type of project was necessary but we are delighted that we delivered it to the people of Northern Ireland when they needed it and we have been commended by CPD for our performance on the project.

“We would like to extend our sincere gratitude to everyone involved; our Construction and Building Services teams, suppliers and subcontractors who went above and beyond so that this vital project was completed ahead of schedule and to its exceptionally high standard.”