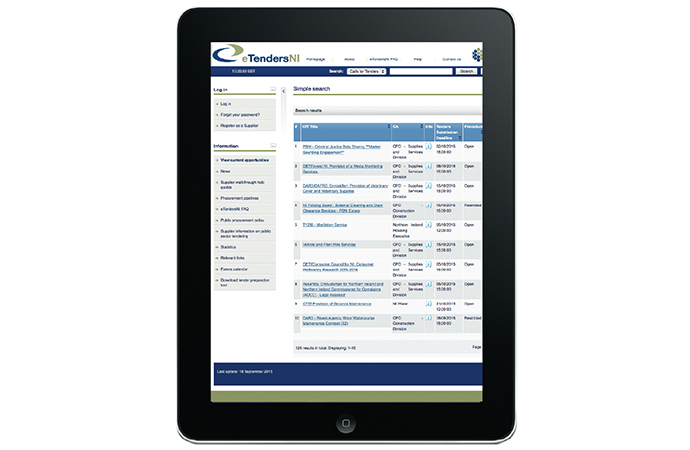 A new online system to make it easier for companies to submit tenders for Government tenders has been launched in Northern Ireland.

The portal has been developed by the Department of Finance and Personnel’s Central Procurement Directorate (CPD), which carries out procurements on behalf of central government departments, agencies and arms-length bodies. CPD is one of the first procurement organisations to use the new system.

The new eTendersNI system has been welcomed by CEF Managing Director, John Armstrong, who said, “We welcome CPD’s commitment to collaborative working with the private sector to develop, procure and deliver better public service, and this new eTendersNI system is certainly positive news for the construction industry in Northern Ireland.

“We will be working closely with our members in the coming months to ensure that they are able to adapt quickly to the new eTendersNI system and avail of every opportunity that it may bring to grow the construction sector in Northern Ireland.”

Launching the new system, Finance Minister Arlene Foster, said, “eTendersNI is another important step along Government’s path to continuous improvement. It will be the principal source of information for public sector tender opportunities in Northern Ireland, with more organisations using it to advertise their tenders than the previous portal, eSourcing NI. Its functionality will improve efficiency for suppliers, by making it easier and faster to bid for government contracts.

“Each year Northern Ireland public sector contracts account for more than £2.5billion of expenditure. Of those contracts awarded in a year, 75% go to local businesses, the majority of which are SMEs. I want to see that success continue and CPD has been working closely with the private sector and the CEF, to improve procurement processes and the visibility of construction procurement projects in the pipeline to help businesses compete for more Government contracts.”