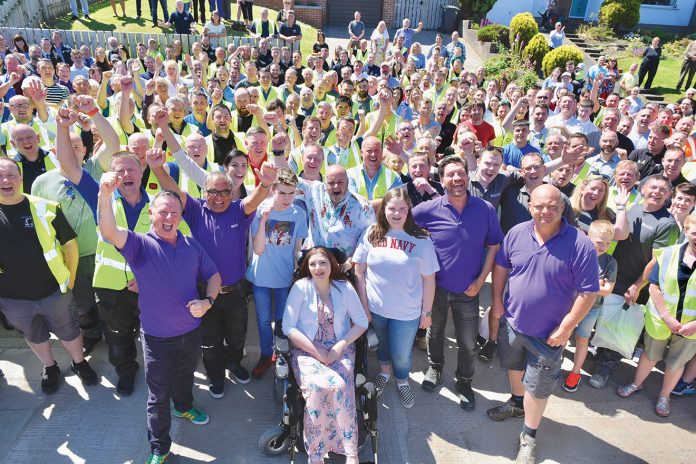 The overwhelming generosity of hundreds of tradespeople and suppliers from across Northern Ireland has changed the lives of a North Down family forever. For the first time in its 20-year history the BBC’s DIY SOS programme visited Northern Ireland in June to transform the home of the McCreight family from Bangor.

And the programme received one of its biggest ever responses to their calls for help as the DIY SOS team completely reconfigured the McCreight’s home. With mum Mandy spending around 80 percent of her time in her bedroom due to health complications, the family spent large amounts of time apart despite living in the same house. An emotional Mandy thanked every one of the tradespeople and suppliers after presenter Nick Knowles revealed their new home to the McCreights on Thursday June 27.

Build Manager on DIY SOS, Mark Millar, who lived in Bangor 35 years ago before moving to England, explained that the programme generally receives around 300 offers of help per programme. In Northern Ireland they received over 850 offers of help from local tradespeople and suppliers.

Presenter Nick Knowles described the nine-day build as an ‘extraordinary’ project. “I have been so proud to work with the tradespeople and suppliers here,” said Nick. “The way the guys have gone about working has been amazing. For people to see this work for the family and for those who worked on the project – and I know many of them have got a lot out of it – it sends out a message all over the country that we are a group of islands full of good people who want to do good things.”

Northern Builder spoke to a number of those who volunteered their time or materials for the DIY SOS Big Build. Pippa Mitchell from Fusion Heating said the company was proud to be able to give back to the community. “This is the sort of thing we try to be involved in and it was brilliant to be picked to be a part of the DIY SOS build,” said Pippa.

“We saw the call to action and we immediately volunteered all of our trades including builders, plasterers, plumbers and gas engineers. In the end all they needed was a plumber but we were delighted to be involved, it was a very worthwhile cause.

“And through working with our partners at PTS we were able to supply items such as specialised toilets and towel rails – basically anything the DIY SOS team needed we were on hand to help.”

Pippa also paid tribute to the East Belfast company’s workforce not involved with the programme. “When we had people on site in Bangor it meant the other guys had to step up and cover their workload which they all did. The rest of the guys were basically on hand to do what was DIY SOS Presenter, Jules Perryman paid tribute to everyone who helped out on the build.

“I have been doing this job for 20 years now and I still get a buzz and a good feeling when I see people giving up their time and materials to come in and help out a complete stranger when they need it most,”

Jules told Northern Builder. “Sometimes in life people, through no fault of their, get into situations they struggle to get out of and this is a great way to help them.

“The response here in Bangor has been amazing from the different trades and suppliers. We have all said how friendly and nice the Irish have been – great people lovely place.

“And the workmanship has also been very impressive. The quality has been excellent throughout – from the first fix, the carpenters through to the decorators who really put a shift in. They were one of the last to leave at night and then were back in at 4am the next day all because they wanted everything to be 100 percent correct.