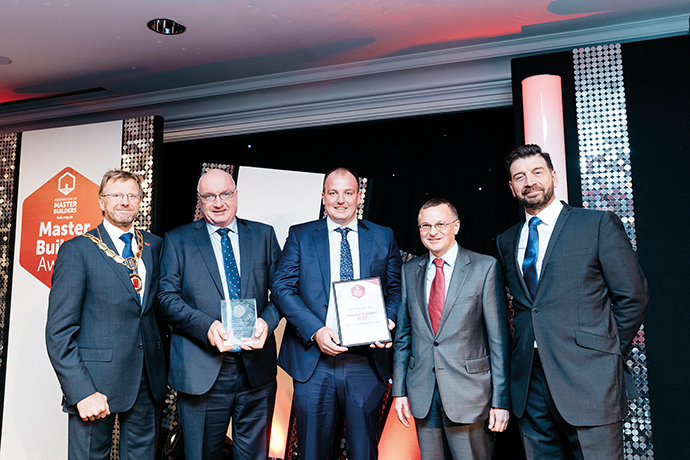 Also in the prizes were Setanta Ltd, winning the Best Energy Efficient Project; Lowry Building & Civil Engineering, winners of the Best Commercial Project; and Kieran Magee, who was named as the Apprentice of the Year.

The Master Builder Awards is a nationwide search for the FMB to recognise the best builders in Britain and takes into account the builders’ technical ability together with customer service.

The awards were all presented by TV presenter and building enthusiast, Nick Knowles, at a glittering ceremony at the Intercontinental Hotel, Park Lane, London in September.

Gavin McGuire, Director, FMB NI, said, “This is a phenomenal achievement and once again showcases just how professional our builders are in Northern Ireland. FMB members in Northern Ireland set high standards, and it is great to see that recognised at a national level.

“We knew that we had strong candidates this year but against national finalists it is always difficult.

To win four individual awards was a great feat in itself, but to see John Dynes & Son named as the Master Builder 2017 is fantastic. We are proud of the success of all the winners and see this as another boost to FMB in Northern Ireland.”

The client, Daniel McConnell, was highly complimentary about the result, saying, “John had the vision to help us create the family home of our dreams and he and his team managed to save us considerable amounts of money along the way with their ability to negotiate costs.”

Setanta Ltd was rewarded for a new-build farmhouse constructed to generate no energy bills. The Castledawson-based company is well-known for its dedication to creating highly energy-efficient and comfortable homes.

Setanta has been certified as a Passivhaus Designer which complements the company’s objective of creating zero-carbon-rated and energy-efficient homes for clients. The farmhouse, located just outside Dunloy, Ballymena, was designed to maximise the energy from the winter sun by utilising large glazed areas on its southern-facing façade. Solar shading was then used to minimise the effects from the summer sun, limiting the potential for overheating.

Martin Marshall, the home-owner, was blown away by the level of service given by their Master Builder.

“The Setanta team was a joy to work with and from the outset they went beyond what I expected from them. To me, a true judge of a quality builder is not just what they are like to work with or the finished product, but also how quickly they fix any problems that arise during the project. I have recommended them several times since.”

Castlederg builder, Lowry Building & Civil Engineering, won a highly coveted Master Builder Award for the best Commercial Project in the UK for the company’s redevelopment of the Silverbirch Hotel in Omagh.

What impressed the judges most was that the extensive work was completed in a ‘live hotel’, where it was essential that the functionality of the business was preserved while the work was being carried out.

Brian Berry, Chief Executive of the FMB, said, “Lowry Building & Civil Engineering had to complete each phase of the build to strict criteria, before being allowed to progress to the next stage. The fact that they did so on time, on budget and to the highest standards – in a ‘live hotel’ – is testament as to why they are the worthy winner in this category”.

The project, which involved the complete refurbishment of the hotel together with an extension, added capacity to entertain more than 1,000 guests, creating a space that is unrivalled by other local venues.

Kieran Magee from Mayobridge, won the Apprentice of the Year title. He is no stranger to winning, having already been awarded gold medals at SkillBuild Northern Ireland 2015 and WorldSkills UK 2015. He is now progressing, as part of the UK squad, towards team selection for WorldSkills 2017, which further demonstrates his ability to represent the UK at the highest level.

He was nominated for the Award by his CITB representative, David Cooper, who said, “Kieran obviously has an exceptional vocational ability, and I have no doubt his work ethic will pay him dividends in the future”.

Brian Berry, Chief Executive of the FMB, added, “Kieran has continually demonstrated exceptional commitment and determination to excel, and is a great example to others. We encourage all construction firms to train an apprentice if they aren’t doing so already. Not only will higher levels of apprenticeship training help solve the skills crisis, it will also provide more young people with an opportunity to begin a rewarding career in construction.”

For more information on the Federation of Master Builders in Northern Ireland, telephone  028 9446 0416 or visit www.fmb.org.uk