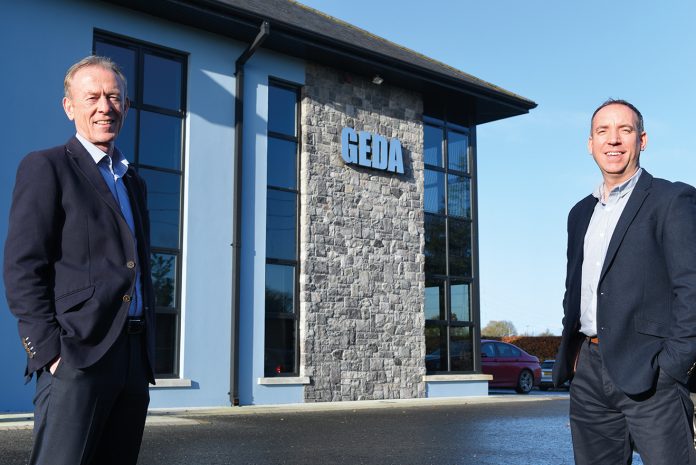 Looking back, Eugene Mckenna describes beginning his career after achieving his Civil Engineering degree at Queen’s University. “My first role was with the Department of Transport in San Francisco in 1978 and I then returned home to spend 8 years with Mivan Construction before joining with Peadar Quinn in GEDA in 1988. With well aligned ambitions our focus was on managed growth underpinned by an open, honest, straightforward approach to everything we did. In subsequent years I have enjoyed a very fulfilling career with GEDA and I have taken great personal satisfaction in how, as a company, we have diversified in terms of the sectors and regions we are operating within.”

GEDA‘s initial focus was undertaking Civil Engineering contracts for the DRD Water and Roads Services in the 80’s but by the end of that decade they had expanded into the Northern Ireland private housing market as Builder/Developers.

Since then, GEDA have continually sought opportunities to further diversify its areas of operation – a strategy that has resulted in a current portfolio of contracts on the ground in Housing, Civil Engineering and General Construction across Ireland, North and South, and the English Midlands.

Eugene said, “Our current order book extends well into 2022, and while Covid has certainly presented challenges, it’s also opened up opportunities for us. In addition to a strong General Building presence, GEDA are particularly well positioned to play their part in delivering the increased housing and infrastructural improvements that have been flagged as priority by the Governments in each of these markets.”

After a two year transitional process, Eugene will officially step down from his role at the end of December 2020, handing over the reins of Managing Director to existing Company Director, Aaron Hughes.

Aaron joined GEDA in 2007, quickly immersing himself in the company’s positive culture. Since 2010, he’s helped to organically grow GB business based on a strategy of progressive local recruitment to deliver quality and value. This, coupled with a keen customer focus, has established GEDA’s strong presence in the East Midlands construction market. As General Manager for GB operations for the past 7 years, and main board Director, Aaron has played an integral role in the recent success and growth of GEDA.

Aaron commented, “Eugene has played a critical role in the development and success of our company, and we cannot thank him enough for the dedication, passion, enthusiasm, motivation and leadership he has given GEDA. On a personal level I would like to thank Eugene for the guidance he has given and the belief that he has shown in me since I first joined the company. We will miss him and wish him the very best in his retirement.

Eugene concluded, “The energy and commitment from everyone I’ve worked with over all of those 32 years has grown GEDA to where it is today and I want to express my sincere thanks to them all. Aaron has very clearly demonstrated his suitability for the MD role and I’ve absolutely no doubt that he, along with the existing board of directors, will continue to steer GEDA wisely on its path to future success.”