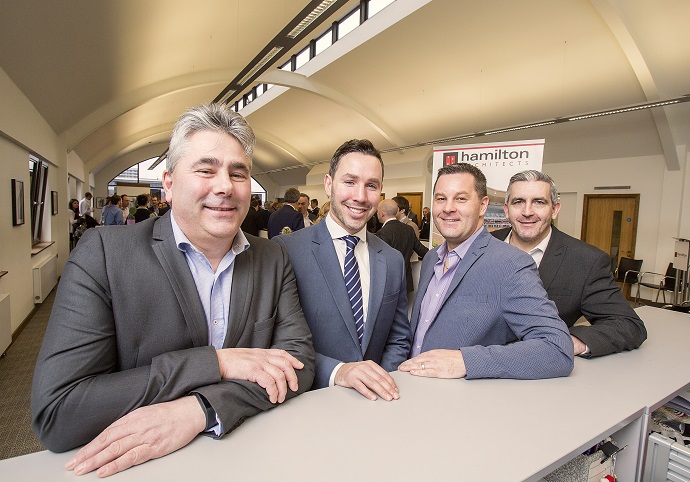 Hamilton Architects, one of Northern Ireland’s leading architectural practices with offices in Belfast and Derry~Londonderry, have announced a strong start to 2016 by winning £30m of contracts in the education sector.

The company, which has been in business over 40 years, have also announced the launch of new London offices at an investment of £750k and the clinching of their first contract in the city, for Ealing Council.

The good news comes at the start of an ambitious 5-year growth plan for the business, which aims to boost turnover by 50% and increase staff by 27 to a total of 65 staff by the end of 2020.

The news was announced by Partners Paul Millar, Mark Haslett and Seamus McCloskey, during an event attended by around 100 sectoral stakeholders and rugby legend Paddy Wallace at Hamilton’s offices in the Linen Conservation Area of Belfast.

“We are delighted to be going into a new year on an extremely positive note,” said Paul Millar. “These wins coincide with the initiation of a plan aimed at driving a strong growth surge which will see our business expand across the UK and into Europe over the next several years.

“Our first contract in London, to design social housing for Ealing Council, is a modest but significant one which has already led to further opportunities. Our new offices, in Old Broad Street, will officially open in the Spring and will give us a permanent presence in the city.

“In Northern Ireland, we are very pleased to have secured new contracts in the primary, secondary and higher education sectors, underlining our success in delivering exciting and innovative learning environments.”

The education contracts are for South West College, for a new campus on part of the former Erne Hospital site; a new primary school and nursery unit at Gaelscoil na gCrann Primary School in Omagh; and a new 600 pupil secondary school for St Joseph’s High School, Crossmaglen.

Hamilton recently completed the £12m SPACE building for SERC in Bangor, an innovative design project which combines the Schools of Performing Arts and Technical Innovation with the aim of enhancing the future potential of the knowledge economy through provision of state-of-the-art facilities.

Paul added: “We are very lucky to have some of the most talented young architects on the island of Ireland in our practice. However, looking ahead, as the economy continues to recover we foresee shortages developing in the skillsets we need to operate successfully as a business and a sector.

“Northern Ireland needs to support and invest in its young people if we are to nurture the talent and ambition that will ensure our place as a significant player in the knowledge economy of these islands and beyond. We want to play our part in that.”

The Hamilton Award for Most Promising Young Designer, comprising a £1,000 bursary and internship opportunity, was accepted by Professor Peter Walker, Head of the Belfast School of Architecture, on behalf of Ulster University and will be awarded to a student in June.

Hamilton, who have earned a reputation as a creative and innovative award-winning practice, offer a multi-disciplinary service to clients in the sport, education, health, conservation, commercial, tourism and residential sectors.