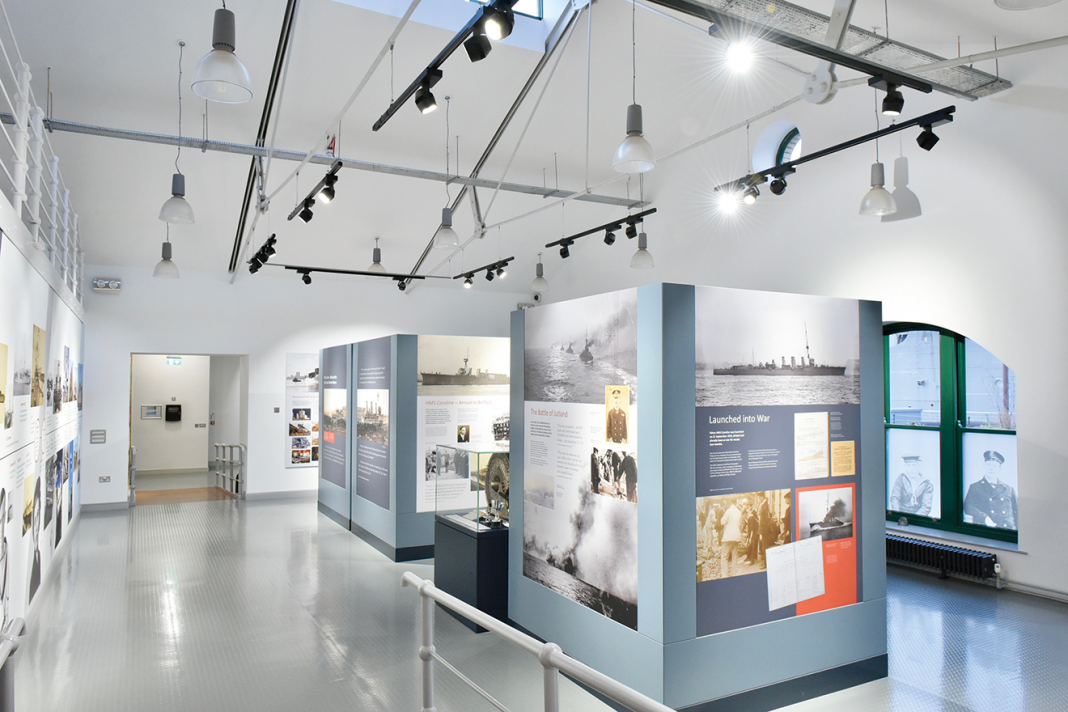 The landscaping works around Alexandra Dock and the restoration works to Thompson Dock Pump House now provide a new quayside visitor centre and exhibition space dedicated to telling the personal stories of those who served on the HMS Caroline.

The ship is the last remaining British WW1 light cruiser still afloat and the sole survivor of the Battle of Jutland, which has been described as having changed the course of the First World War. The National Museum of the Royal Navy (NMRN) and the Department of Enterprise Trade and Investment have worked as partners to restore and interpret HMS Caroline through an £11million refit to launch it for a new life as a floating museum.

In the next step of this regeneration process, the historic Pump House that served the dock where Titanic was built has now been transformed into a visitor centre for HMS Caroline and features much of the original Edwardian-era machinery and associated technology.

Working collaboratively with the NMRC’s project managers, Artelia, and conservation architect, Consarc, and the rest of the design team, Tracey Brothers once again displayed the company’s partnership approach.

Alan Brennan, Contracts Manager at Tracey Brothers, commented, “This was a painstaking process to ensure we preserved the history of this important site and the entire project required a lot of co-operation and co-ordination between the client and the design and construction teams. We’re delighted to have been involved in this project and at the feedback that it has already received from the general public.”

He added, “We used traditional building skills in diverse elements such as stonework, lead work and conservation brickwork. We had to gain approval on all the samples of salvaged bricks proposed for replacement material while the slate was salvaged from the original building and reused after careful removal. We made every effort to retain as much of the original materials as possible.”

This was demonstrated on the dock, where the cobbles were removed one by one, washed and individually repositioned by hand in their original locations and patterns. Where new materials were required, these were sourced as natural stone and exposed aggregate concrete, as appropriate for the location. Tracey Brothers called on the expertise of specialist craftsmen to carry out various crafts and meet intricate requirements of this project.

A 25-metre footbridge was installed across the mouth of Alexandra Dock to effectively open up access to Alexandra Dock from the Pump House for the first time in many decades. The bridge was one of the final pieces in completing this complex and very attractive cluster of Victorian architecture, engineering and marine technologies centred on HMS Caroline.

This painstaking attention to detail and commitment to heritage has been warmly received by visitors from across the world and has also caught the eye of the judges, with Tracey Brothers winning the Restoration Award 2018 at the prestigious Construction Employers Federation Construction Excellence Awards for the company’s work on this project.

William Coates has once again showcased the company’s ability to meet the specific requirements of heritage projects by completing a comprehensive M&E installation at the HMS Caroline Pump House.

The award-winning M&E engineering services company has already completed the M&E installation on the HMS Caroline – the last remaining British WW1 light cruiser still afloat and the sole survivor of the Battle of Jutland that has been transformed into a floating museum and highly popular tourist attraction.

The restoration of the Pump House at Alexandra Dock into a visitor centre is the next step in this ambitious restoration project and following the company’s successful and painstaking work on the HMS Caroline, William Coates was the obvious choice to complete this phase.

“Working on the HMS Caroline was probably the most unique projects we’ve ever been involved in,” explained Gary Coleman, Managing Director, William Coates.

“Not many companies can say that have carried out work on a WW1 cruiser and it was a superb challenge for our team. So we were delighted to return to the Alexandra Dock and to work with Tracey Bros Ltd on another aspect of this restoration project.

“While not to the same levels as HMS Caroline, the Pump House still offered us with the type of challenges you’d expect from working on a heritage project.”

Versatility has always been a strength of William Coates and the company was able to find the right balance between respecting the heritage of the Pump House while still successfully installing a modern M&E system.

The Mallusk-based company already had a strong working relationship with the National Museum of the Royal Navy from the HMS Caroline project and William Coates enhanced this with a superb partnership approach with main contractor, Tracey Brothers Ltd.

The first stage involved the stripping out of the existing M&E services, which also included the removal of hazardous oil from the switchgear that was in place.

The electrical installation focused on providing a comprehensive lighting package that included general, feature and display lighting both internally and externally as well as a fire and security system incorporating fire alarms and CCTV solutions. The mechanical installation involved heating, hot water and wastewater systems as well as air-conditioning and ventilation. William Coates also installed a Building Management System to control these various aspects. William Coates also had to maintain existing services to other buildings while connecting various elements with those on HMS Caroline.

The completion of the Pump House adds to a project portfolio at William Coates that is as diverse as it is impressive. Formed in 1963, the company has grown to become one of the leading mechanical and electrical building services and facility management contractors in the UK and Ireland.

With a team of highly qualified and motivated electrical and mechanical professionals, William Coates is committed to understanding customers and their requirements, executing projects safely to the highest level of quality possible. Its core philosophy of quality, value, service and delivery, enables the team to focus on project completion on time, within budget and carried out to the highest possible standard. This ethos has played a major role in ensuring long-term repeat business, which has been fundamental to the company’s continued success.

ASF Engineering has enhanced the practicality and overall aesthetics of the renewed area around the Pump House for visitors by supplying a range of street furniture that includes benches and litter bins.

Established in 1996, ASF Engineering has manufactured a wide range of street furniture for many prestigious public realm schemes, parks and retail developments throughout the UK and Ireland. In addition, ASF Engineering can count a range of local councils, Department of Infrastructure, Department of Communities, the Education Authority and some of the province’s largest civil engineering and building contractors amongst its clients.

JCS Joinery & Glazing provided a specialist solution to match the heritage requirements of the refurbished Pump House at HMS Caroline.

Established in 1991, the family- run business has become adept at meeting the challenges of heritage projects such as this that require windows and doors that can seamlessly replicate the original aesthetic.

Providing a wide range of services to the public and private sector throughout Ireland and the UK, JCS Joinery & Glazing manufactures solutions for both new build, heritage and refurbishment projects.

The company is a specialist in the manufacture and installation of timber windows, doors and staircases for residential and commercial projects as well as the reproduction of these solutions for conservation areas and listed buildings. In recent years, the company has also grown to deliver products for shopfitting. The versatility and quality of workmanship has won the company many major contracts throughout the country working alongside top architects and design teams.

Hardscape Ireland is privileged to be amongst the stakeholders involved in the creation of the exterior hard landscape to the HMS Caroline Pump House Visitor Centre and Museum.

The company played an integral role in adding value to the surrounding quay area where the famous ship is now docked. HMS Caroline is the sole surviving vessel from the Battle of Jutland in 1916. After life as a C-class light cruiser in the Royal Navy and as an administration centre, she was decommissioned in 2011, at which time she was the second oldest ship in service after HMS Victory. In July, 2017 HMS Caroline opened to the public as a museum ship at Alexandra Dock beside the Titanic Pump House, which has now been converted into a new Visitor Centre that was officially opened in 2018.

Hardscape’s ability to source materials with the most careful consideration of technical, ethical and sustainable requirements was critical to this heritage- sensitive project.

Respecting the individual demands of all parties involved in production and logistics, Hardscape’s ultimate aim was to deliver a high quality service. This was achieved by working closely with landscape architect, Park Hood Design, Belfast, and main contractor, Tracey Brothers. The collaborative approach led to the supply of materials including European Silva Vilar granite kerbs and Chinese Yellow Rock granite setts and paving alongside bespoke treads, risers, cladding, blister tactiles and quoin pieces. Hardscape also supplied a range of reconstituted cobble stones to match in with the existing stones in place.

This project is another perfect example of how Hardscape helps to drive the inspirational process of combining quality paving materials with vision and research to create outstanding public spaces.

Established in 1994, Hardscape is now a respected hard landscaping materials supplier with global reach and experience, employing 60+ people. The company uses its expertise and love of natural and man-made materials to ethically and sustainably source the highest quality materials from across the world.