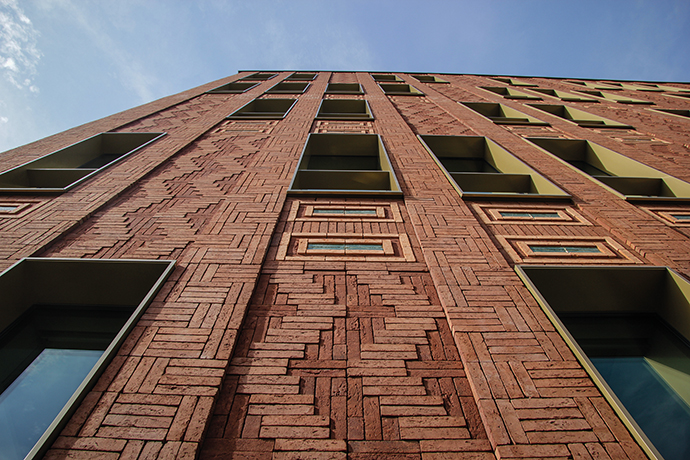 A recently constructed building at Saxion – a major university in the Netherlands – has used a new, pre-fabricated curtain wall façade structure combined with facing bricks from Vandersanden Group and available in Northern Ireland from Kingscourt Country Manor Bricks.

IAA Architects of Enschede decided to build part of the building underground so that Saxion’s new university building should not have four separate entrances. A large ‘cellar area’ serves as a connecting element between the separate structures.

The architects used a special pattern of bricks to reflect the historic context of Enschede, a place noted for its variety of brick patterns and ornaments. Specialists and experts met at an early stage to work out how to implement a special form of brickwork. There were continuous synergies between various design techniques to display the patterns for the building in the design phase.

During development of these patterns, the original dimensions of the grid – 1200mm – evolved to 1260mm because the size of a Water-struck brick is 210 mm. IAA Architects incorporated that fact in the drawings and the engineering of the building.

A long with advisers from ARUP Amsterdam and designers from AD Develop, IAA Architects opted for Vandersanden Group’s Signa system.

Bricks are not laid in a traditional way in this environment. Since the bricks are glued to a backing panel, the architect can ‘rotate’ the bricks during the design process, both in depth and in relief, and he can also play with colours and patterns. It is an attractive and flexible system with many possibilities. The panels can still be dismantled even after the bricks are laid.

The brick pattern at Saxion satisfies a number of constraints. The school building is surrounded by beautiful buildings with ornamental brickwork while decorative brickwork is a feature throughout Enschede. The architects wanted to reflect this in the building.

The zigzag slalom is a metaphor for the weave of textiles. The flexibility of the range was also a critical factor for choosing a vertical division in the façade, and that was also continued through in the pattern.