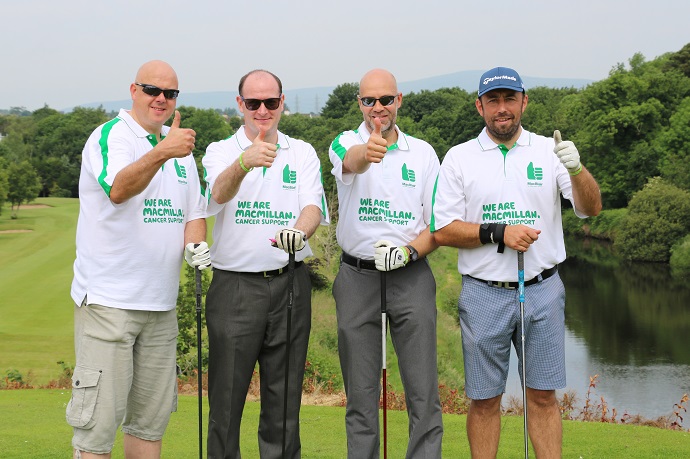 The Belfast and Bangor teams both teed off on June 20 – the hottest day of the year so far. The Belfast team took on their challenge at Rockmount Golf Club, starting at 6am and dropping the final shot at 8pm that night! Captained by MacBlair Rosetta Branch Manager, Lawrence Murdock, the team consisted of William Gracey, Mark Thompson and Jonathan Feenan and included representatives from the Duncrue, Rosetta and Moffett Thallon branches.

The Bangor team, captained by MacBlair Bangor Branch Manager, Billy McAuley, decided to take on two courses in one day! The team, which included Glen Sharratt, Jack Upritchard and George Blackstock (all from the Bangor Branch), set off at 6am at Clandeboye Golf Club before completing the challenge 16 hours later at Donaghadee Golf Club

All four clubs kindly waived the green fees for the event while all MacBlair branches got behind the teams with various fundraising activities in store.

You can still donate at any MacBlair branch or online via the justgiving page – www.justgiving.com/ fundraising/macblairgolf