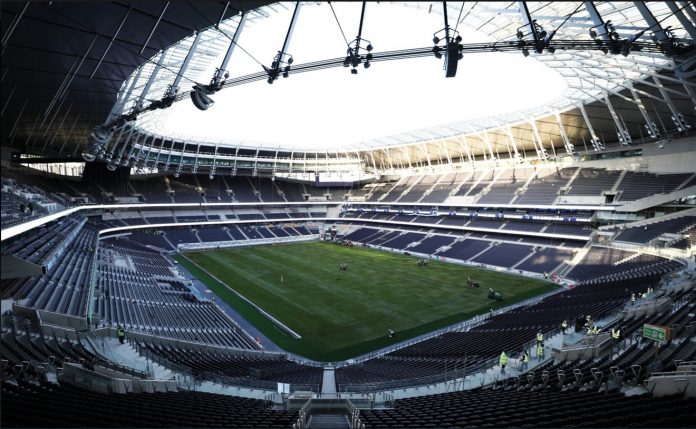 Macrete Ireland Ltd was contracted to manufacture and deliever precast concrete units for the construction of a completely new structure on a brownfield site directly adjacent to the old White Hart Lane stadium. Consisting of an entirely precast concrete main stadium bowl, with a steel and glass canopy structure mounted above the seating area, the project was ambitious, requiring specialist expertise to execute it to the high standard necessary.

The concrete mix used had sustainability credentials, reusing industrial byproducts such as ground-granulated blast- furnace slag (GGBS) and limestone to reduce its carbon footprint. Macrete also employs renewable energy sources to power their production facilities as a means of offsetting the carbon produced in the manufacturing process. In total, approximately 15,000m3 of concrete was used in the project, equating to 2,500 lorry loads. Their bespoke mix resulted in the correct flow, working time and robustness that allowed for next day de-moulding and minimal finishing work, producing a blow-hole- free finish to the external faces of the units. The mix also met the aesthetic requirements for the new stadium, as it was a lighter grey than traditional concrete mixes.

Terracing units were installed onto large, precast raker beams, which presented challenges in terms of steel fixing, mould work, casting and transport. The design had to be robust enough to support rows of terracing units, but light enough to be transported to London by road and installed using tower cranes. This was achieved with a slight increase in reinforcement density resulting in reduced depth and overall volume.

Transporting the units by road was the most practical approach, allowing for better control of load type and frequency. Careful planning of each delivery ensured the maximum number of units were on each trailer, thus reducing the number of deliveries.

Macrete used their transport partners who had the capability to deliver both multiple trailers and heavy units to the site to meet the demanding timescale. Already, the stadium has been chosen as a venue for the Rugby League Ashes Series in 2020 and has hosted several NFL games as well as, of course, Tottenham Hotspur home matches.

Macrete Ireland is very proud to have been involved, “from the ground up” with this prestigious and well publicised project and is delighted that their contribution has been recognized by the Northern Ireland Concrete Society, winning an award for Outstanding Merit in the Use of Concrete. With over 40 years of industry experience, Macrete supplies materials and expertise to UK blue chip construction companies and are specialists in precast solutions for the sea defence, civil engineering, railway infrastructure, sports stadia, and water and utility sectors.