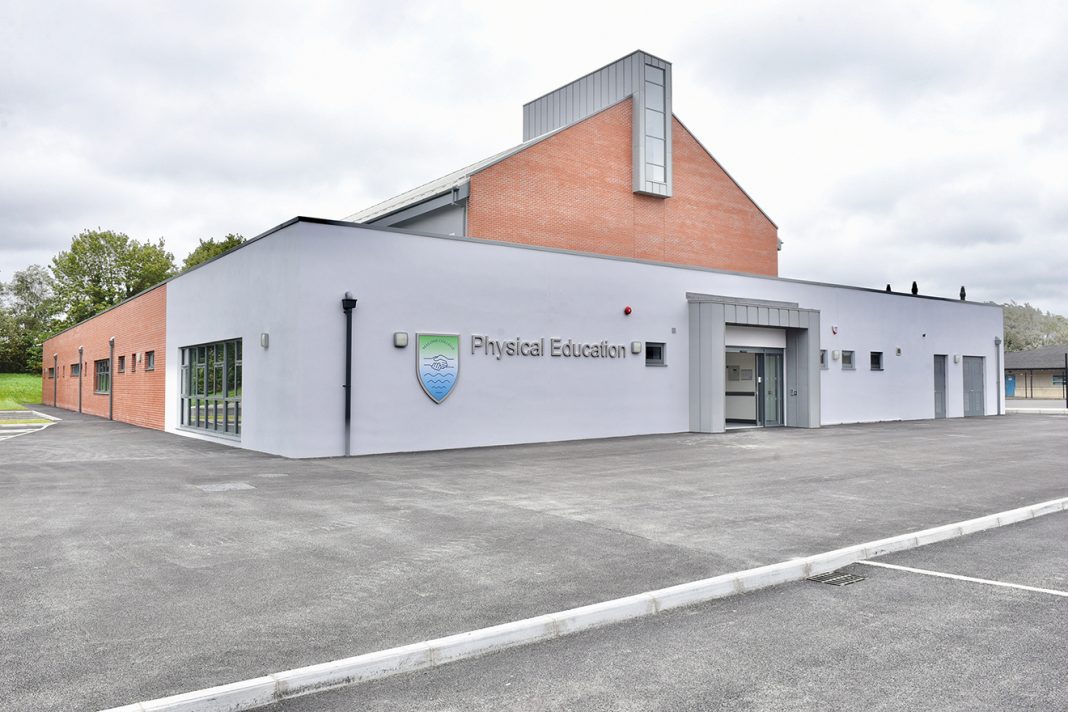 For over 20 years, students attending Malone Integrated College in Belfast had to do without a sports hall. That all changed earlier this year with the completion of a modern, state- of-the-art sports hall/gymnasium, boasting an internal area of 1,424m2. As well as the sports hall, students can now make use of a fully floodlit, 3G synthetic turf, sports playing field.

Ganson UK was the main contractor on this much needed project, providing its expertise, competency and technical know-how to ensure the job was completed on time and to the highest standard. The company has extensive experience working across a range of sectors, on projects varying in type and size from multimillion euro contracts to small and medium-sized projects. The new sports hall at Malone College was a traditional brick and block build. It consists of four changing rooms for students, two for teachers, a fitness suite and a PE classroom.

Although this wasn’t a massive undertaking in terms of size, the new sports hall is a hugely important addition to the college and one that both staff and students will utilise to its full advantage for years to come. The biggest challenge for the Ganson team was the lengthy lead-in times. A very specific façade system was specified by the architects for the windows in the sports hall.

“A system from Kalwall, a company that manufactures high performance window applications, was selected for this project. It was certainly the right product for the job but as it was coming from the US, we waited quite a while for it,” said Tony Bradley, site foreman at Ganson UK.

The lead-in time for this particular product was 16-18 weeks. “That was a challenge as it had the potential to hold up works on site, which would have had a knock-on effect on the rest of the construction team. By liaising with the sub-contractors, we managed to ensure there were no repercussions for the other teams on the project. Once it arrived and was installed, the Kalwall system worked extremely well.”

Tony and the rest of the Ganson team were on site for just over one year. The fact that the site was situated at a slight distance from the school meant students weren’t adversely affected by day to day construction activities.

“Although we weren’t in close proximity to students and general traffic, we still had to ensure there were no deliveries to site at peak times, ie when school was starting and finishing. The safety of students and staff was paramount and something we took extremely seriously. We liaised closely with the school to ensure we avoided any disruption to the students’ school day and organised deliveries around their schedule.”

A very tight deadline meant Ganson UK was under pressure to complete the project on time and to a very high quality. “That’s something that we managed to do, thanks to the close collaboration on site between all the teams involved. Everyone had the same end goal, which was to deliver an exemplar sports hall and pitch for a student body that hadn’t had those facilities previously. I think we more than achieved those goals. This was a great project to work on and it’s one that we’re really proud of.”

Antrim-based Apollo Ceilings supplied and fitted all the acoustic panels in the new sports hall at Malone College, along with all of the suspended ceilings throughout the rest of the building. Clive Perry and the team at Apollo Ceilings also completed the boarding and drylining for the high level section in the sports hall, dubbed the ‘Lantern’. At 16m off the ground, this particular element of the job required very specific health and safety considerations. In addition, special equipment including a scissor lift was used by the team. This required all members of the team to have the correct licence to operate it.

With years of experience across a range of sectors, Apollo Ceilings was well able to deal with any challenge that presented itself. “The most tricky area was fitting a soundproof screen above a sliding partition which was specified for the sports hall, which again required us to work at height. That was really the only element of the job that required a bit more consideration.

The rest of the project was quite straightforward. We approached the job in the same way that we approach all projects we undertake; with the intention of doing the best possible job and meeting the deadline.”

Clive and the rest of the team did indeed meet the tight deadline, delivering a top quality job for the client.

“We’ve worked with the main contractor on several projects in the past. We’ve established an excellent relationship there and we look forward to working with them again in the near future.”

Ace Scaffolding supplied, erected and dismantled scaffolding at the Malone College project. The company’s commitment to quality workmanship and the highest possible standards of health and safety were evident throughout this venture.

Reliability and efficiency are at the heart of Ace Scaffolding, a company that has completed projects across Northern Ireland.

Adrian and the team pride themselves on their attention to detail and solutions-focused attitude, a company ethos that ensures repeat business and an extremely satisfied client base.

Fox Bros Ltd was responsible for all of the internal and external plastering at the new sports facility at Malone Integrated College. The experienced company also looked after all the floor screeds at the new facility.

Quick drying floor screeds were selected to allow for a speedy process and to ensure the next phase of the project could go ahead on schedule. An existing relationship with the main contractor helped Fox Bros Ltd deliver a high quality and excellent workmanship.

Vaders Cleaning Solutions was responsible for ensuring the new Sports Hall at Malone Integrated College was pristine upon handover. Gerard Murphy and the rest of the team carried out a full Builder’s Clean followed by a Sparkle Clean on the project.

Another Sparkle Clean after snagging ensured the project was ready to be handed over to the client.

“Anything the builders did, we cleaned up after them. Ganson had access to tower scaffolding in the building so that allowed us to access the high level windows,” said Gerard Murphy.

Cleaning products from Danny Jones in CleanCare helped the Vaders team complete the job to a high standard while a well planned out build phase ensured the team was able to meet their deadline.

“Ganson is an excellent company to work for; all the design teams were on board so it was just a matter of working in close collaboration with everyone.”