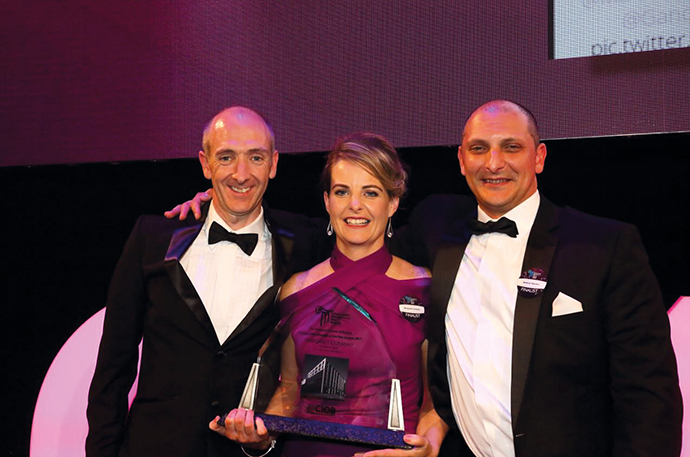 Margaret Conway of McAleer & Rushe has spoken of her surprise and pride at winning both her Gold category medal and the coveted overall ‘Construction Manager of the Year Award’ (CMYA) at a prestigious UK Awards event.

In doing so, Margaret has earned a place in the record books as the first woman to win the Construction Manager of the Year title. The Chartered Institute of Building (CIOB) has been running the awards for 39 years, with Margaret beating 84 finalists and 8 other gold medallists to take the coveted title.

Margaret’s achievement is all the more remarkable because it was her first role as a construction manager, working on the £22m nine-storey office block at 9 Adelaide Street in Belfast City Centre which McAleer & Rushe both developed and constructed.

“I was very surprised as I really didn’t expect to win the award, especially after my colleague Paul Marlow had done so last year,” Margaret told Northern Builder. “In fact, one of our directors, Shane McCullagh, had to convince me to enter in the first place. I was over the moon just to be shortlisted, so when they called out my name I really didn’t know what to think.”

Margaret said she accepted the award on behalf of the whole team.

“I think it is also a validation of the faith put in me by the directors at McAleer & Rushe and the hard work put into this project by everyone involved. My consultants, sub-contractors and site management team worked together so well, it really was a great team effort.”

Working with the client, Belfast City Council, Margaret delivered considerable cost savings of over £1m by reducing the height of the building and adapting the existing raft foundations for the new superstructure, as well as completing the 80-week project two months early with a clean health and safety record and an Excellent BREEAM rating.

“Through good management and planning we always stayed one step ahead of the project’s requirements. The experience of McAleer & Rushe and the team around me played a considerable part in this. I’m not someone who is afraid to ask for advice or a second opinion and I’m lucky to have talented people around me offering assistance and support.”

Margaret firmly believes that this is down to the positive working environment at McAleer & Rushe.

“From the Chairman, Chief Executive and Board of Directors down, there is a strong work ethic within the business. You are encouraged to grow and learn, with plenty of opportunities to progress. I’ve been here for nearly eight years and I have been encouraged every step of the way.”

CIOB President, Rebecca Thompson, said, “Margaret is a true inspiration for anyone thinking of entering this exciting and challenging industry. As well as remaining in control of the immense technical and logistical challenges of her day job, her inclusive style has encouraged young people to get involved in construction. Our sector badly needs a more diverse workforce, and Margaret shines out as a young leader who is making a genuine difference. We will watch her career with great interest.”

Martin Doherty, Belfast City Council Project Manager, added, “9 Adelaide Street was a challenging scheme in terms of programme, site logistics and budget. Margaret was intuitive to Belfast City Council’s needs, always focused on delivering the scheme on time, whilst never losing sight of the importance of safety or quality. Her ability to communicate all issues and foster a real sense of teamwork sets a benchmark for the project.”

Margaret’s success makes it back-to-back titles for McAleer & Rushe and the company also picked up two further medals, with Michael Yohanis and Paddy Connolly winning Gold and Silver respectively within the Leisure and Retail category.

Commenting on the team’s achievements, Martin Magee, Managing Director of McAleer & Rushe said, “The success of Margaret, Michael and Paddy at this year’s CMYA is truly outstanding. These awards demonstrate the diversity, inclusivity, commitment and expertise of our employees and our teams, and we are immensely proud of their achievements.

“Investing in our people, developing their experience and nurturing them in their areas of interest and expertise is at the heart of our success and central to our back-to-back CMYA wins.