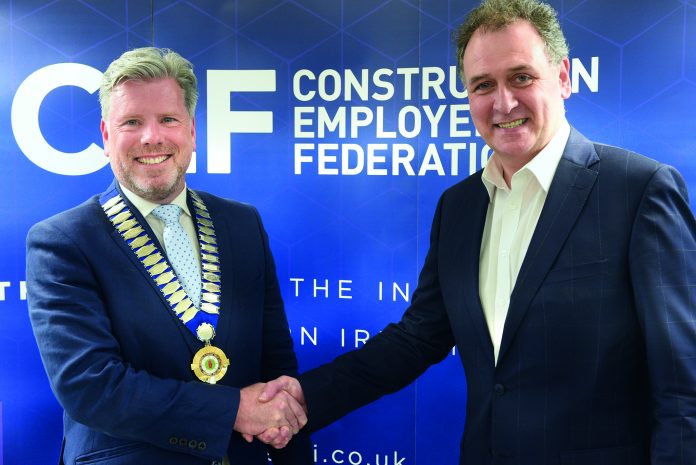 The CEF held its first in-person AGM since the outbreak of the Covid-19 pandemic at the award-winning Erne Campus, South West College, Enniskillen on June 6.

During the lively lunch meeting – which was also attended by invited members of the CIOB – the CEF announced it’s new President, Martin O’Kane, Deputy Group Managing Director for Heron Bros.

“Given the onset and challenges of the Covid-19 pandemic and, latterly, the material shortages and price increases of the last 18 months, it is undoubted that John’s term will go down as one of the most tumultuous in the 75+ year history of the CEF. Throughout, John provided calm and assured leadership for the industry, and it was fitting that his last engagement as President took place in the award winning South West College in Enniskillen for which Tracey Bros have, rightly, won so many plaudits. 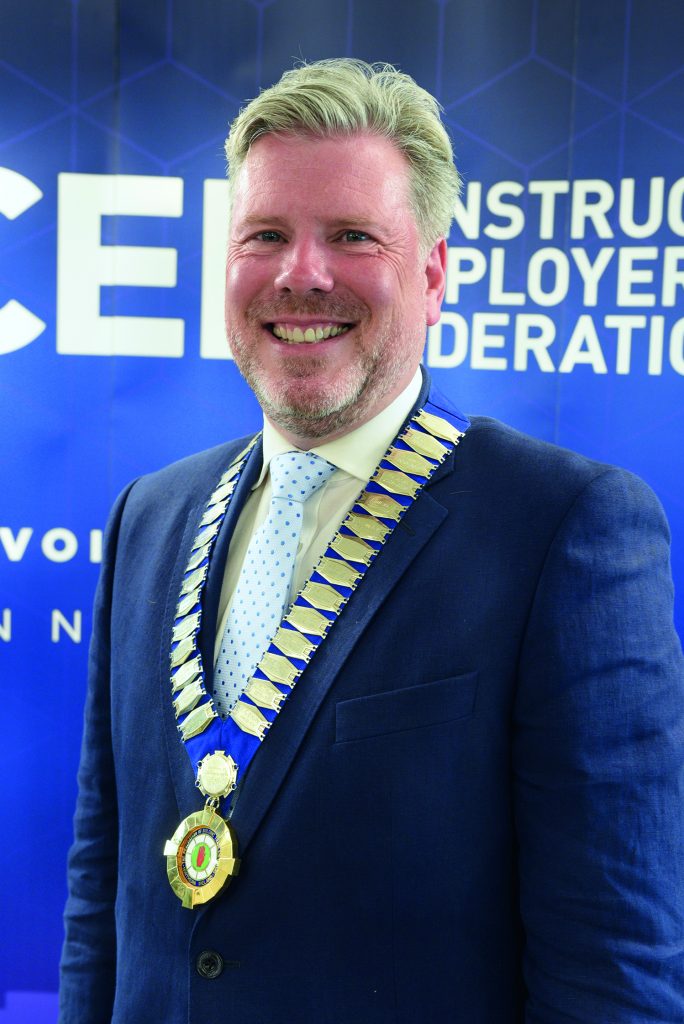 “All at the CEF would like to take the opportunity to sincerely thank John for his passion and commitment and wish him and Tracey Bros every continued success.”

In his first speech as President of the CEF, Martin O’Kane spoke to the assembled members of the CEF and invited CIOB members. He stated, “It is a great honour and privilege to have been elected as President of the CEF. At the outset, I would like to pay personal tribute to my predecessor John Tracey who has successfully led the organisation through two years of unprecedented challenge for our industry.

“His leadership, along with valued contributions from across the CEF membership, has meant that we have been able to navigate arguably the most sustained period of difficulty that any of us could have ever imagined.

“Our sector has, however, shown its adaptability, resilience and innovation in abundance in order to not only continue to work safely through the worst moments of the pandemic but also seek to find means to continue to deliver all manner of projects in the face of seemingly never-ending materials shortages and price increases. 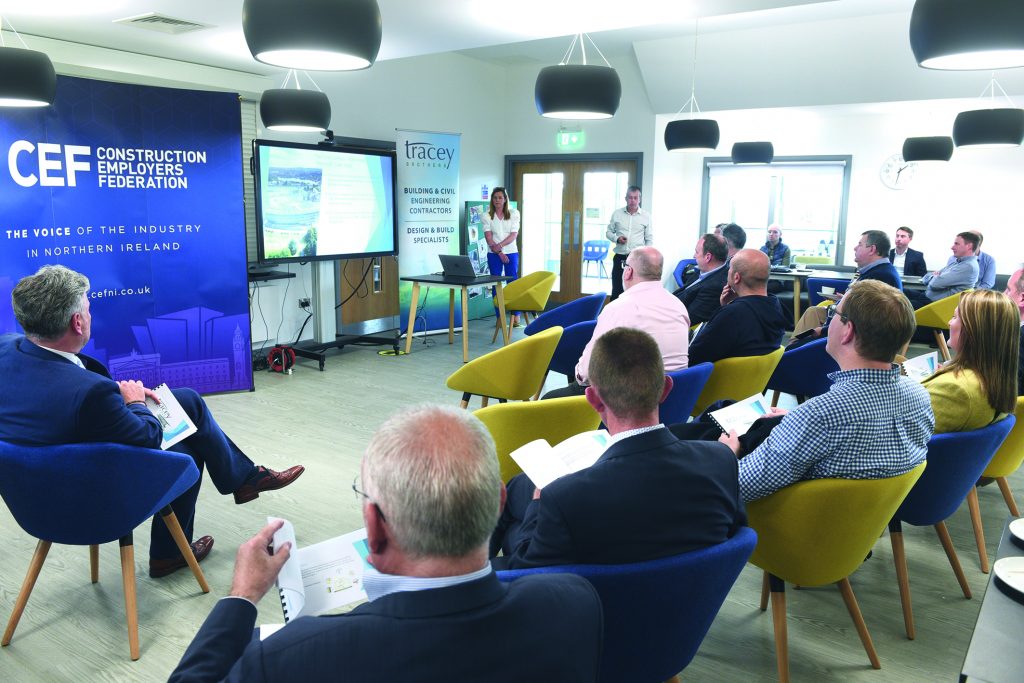 “At the start of my two-year term, it is undoubted that our role in representing the views of our industry remains as important as ever.

“Not only must we renew our endeavours in making sure that public contracts can be delivered at a fair price with equitable transfer of risk in the current climate, but we must also make sure that our sector recovers sustainably from the pandemic and sees resolution to the long-held challenge of needing a sustainable pipeline of public work.

“It is incumbent on us to play a significant role in the decarbonisation of our economy and society through reducing our own emissions and building the new, greener housing that our community needs.

“I foresee a significant programme of work related to overhauling and reforming our current planning system which does so much to stifle investment.

“We will also continue to work with key partners in our education system in order to ensure that the value of a career in construction is better understood resulting, ultimately, in a new generation of young people availing of the many and varied opportunities that we can provide. Vital to the sustainability of our industry is ensuring that these opportunities are open to all, regardless of gender, background or any other characteristic. Talent will be the platform for entry to our industry and irrelevant and dated barriers to entry must be removed. We must also harness the experience and talent of those who wish to transfer from other occupations, or none, and offer retraining and support at all levels. 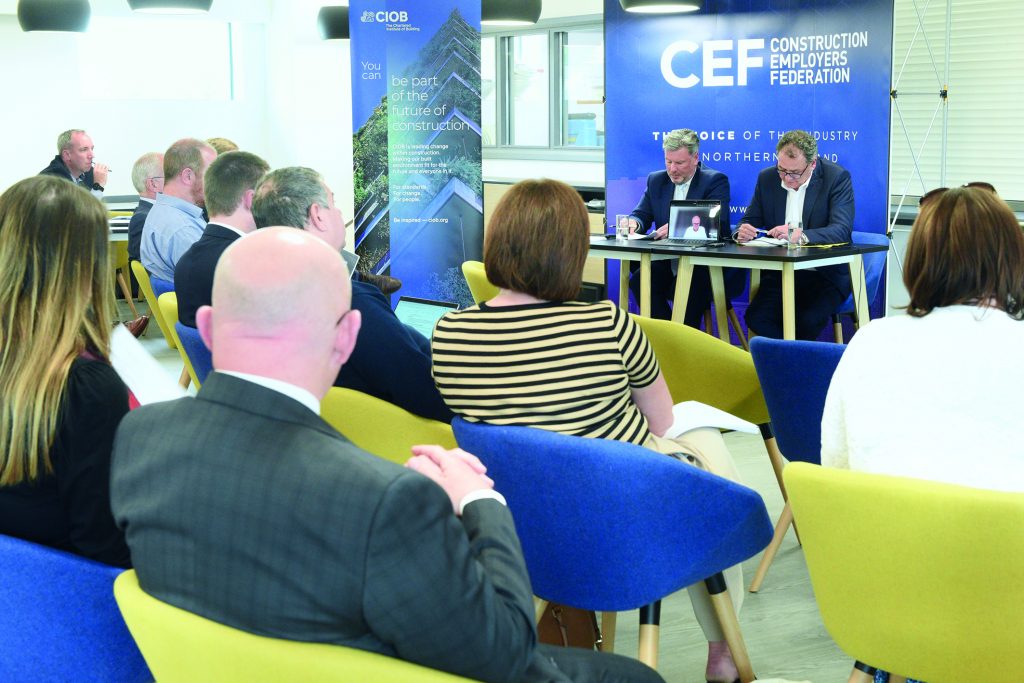 “There is much for our industry to progress over the coming two years – something that I have every confidence we will do and do very well.

“Where I believe a lot of my focus as CEF President will be over the coming weeks and months, will be in ensuring meaningful engagement with whatever form of devolved government manifests itself. Moving ahead from the last two years will require a renewed partnership between business, society and our political leaders.

“While we face many challenges, we also stand to benefit from the many opportunities that unlocking the construction sector’s undoubted potential can bring. It is that consistent message of positivity that I shall bring as I look to represent you over the coming two years.”

Following the speeches, members enjoyed the opportunity to renew old friendships and spark new ones during the AGM lunch. Later, members were taken on a guided tour of the Erne Campus, to witness the ground breaking and award winning Passivhaus construction techniques and installations that has earned Tracey Bros. international plaudits.