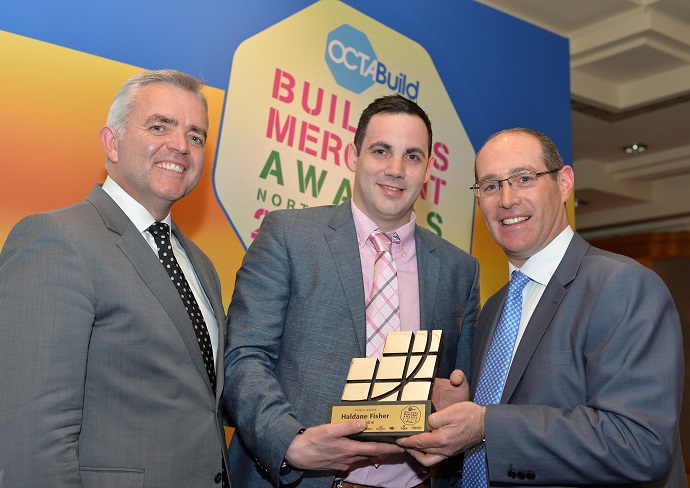 The awards judge, James Burke, was lavish in his praise of the high standard he found among all the builders’ merchants he visited, describing the winners as exceptionally well-run businesses. He said that, since the last awards in 2014, there was a stronger focus on sales growth structures and a greater focus on using digital media.

It proved a great night for Haldane Fisher, with the company’s Conlig branch taking home the Customer Service Award, and will be seen as a reward for a continued focus on investment.

David Haldane, Managing Director of Haldane Fisher in Northern Ireland, said, “We are proud to receive this award and see it as a reflection of the positive changes we have made over the last two years in all our branches.

“At all times, our driving force is to support our customers and, with changes behind the scenes with a new management team now in place, and a number of developments at our trade counters, we will continue to build on this success.”

David Brown, Branch Manager at Haldane Fisher, Coleraine, is equally as proud at being named as Builders’ Merchant of the Year for Northern Ireland.

“We listened to what the judge had to say after the last awards and we made the necessary changes, so we are delighted to receive this award. We have a large yard area that is recognised for being well maintained and easily accessible by both the trade and retail customers. However, it was the changes that we have made to the shop area that have made the real difference.”

Coleraine – like all the Haldane Fisher branches across Northern Ireland – has benefited from a redesign of its showroom and trade counter that has developed a stronger customer-friendly layout that better showcases the company’s vast product range.

As equally recognised as specialists in timber as it is as a leading builders’ merchant and plumbers’ merchant, Haldane Fisher’s customers are faced with a significant array of products. To create a more coherent layout in each shop area, the company invested significantly in a process that was aimed at making every customer’s visit a lot more straightforward.

Lowered shelf heights and clear signage that defines each product range makes it easier for customers to find the products they need. The new shop layouts also see associated products strategically located alongside each other, along with dedicated areas for seasonal products and for the Trade Best Buys promotions.

While those changes were initiated across all Haldane Fisher branches, they were fully embraced by the team in Coleraine, as Martin McNair, Associate Area Director, explained.

“The staff at the Coleraine branch put a lot of effort into making the necessary changes and while they supported the overall philosophy.

“After monitoring sales figures for a period of time, they felt certain aspects could be improved’, he said. “So they used their own initiative to make the changes they felt were required in terms of where certain products were displayed and the results have been superb.”

To find out more about Octabuild, visit the website at www.octabuild.ie or to read more about all the winners, CLICK HERE