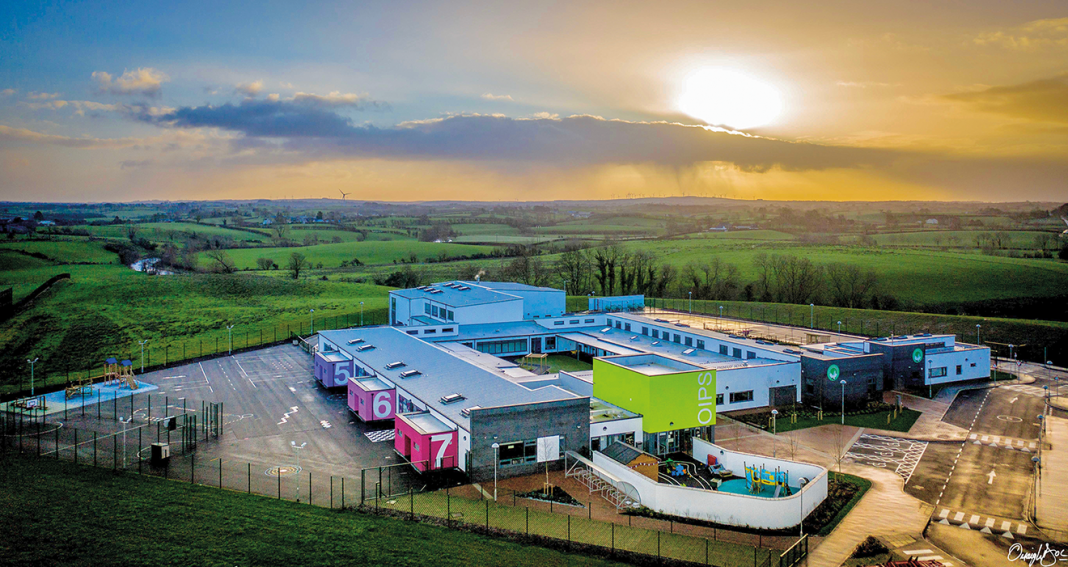 Omagh Integrated Primary School was built on a new greenfield site right beside Drumragh Integrated College, which Woodvale also built. The new school acts as a feeder into the College. “Essentially, we were tasked with providing a campus of integrated education. We were the main contractors on the project and so were responsible for the entire build package, from excavation to final handover,” said Paul McGread MCIOB, Contract Manager at Woodvale Construction.

The most challenging aspect of the job presented itself immediately – a massive spoil had to be removed before any work could begin. “Over 100,000 cubic metres had to be removed. It was a mammoth task and had to be carried out in terrible weather. As well as being a huge undertaking in itself, consideration also had to be given to the College next door. We managed to complete the task efficiently, without compromising the tight deadline.”

An collaborative approach to the job was adopted from the beginning.

“The client was very much involved in the project from the outset. We also worked very closely with Todd Architects and with the rest of the sub- contractors to ensure the project was completed to the very highest standards.”

The impact of colour in educational facilities was considered by the design team from the initial stage. Each cloakroom area has a colour that the children will relate to. A multi-purpose hall that can be used for either dining or PE is also a key feature, along with a large reception area and courtyard. Integration is the primary ethos behind the school, which is connected to the existing College by a pathway.

To avoid disrupting pupils and parents at the College, deliveries could only be made at certain times of the day. “We were very mindful of the fact that an operational school was right beside us so we endeavoured to keep any disruption to an absolute minimum.”

When the spoil was removed and excavations commenced, the rest of the project ran smoothly. The other issue that Woodvale found itself facing was meeting the very tight deadline. “There were quite a few changes along the way and as we were determined to deliver a project that conformed to the designer’s specifications, additional work was required to ensure we achieved those aims. The initial schedule had pupils back in the classroom by May; the board wanted them to have a month in the school to get used to their new surroundings.”

Paul and the team at Woodvale succeeded in getting pupils back into the school by the end of June, a week before the end of term.

“It was a great achievement considering the extremely tight timeline and the number of changes. We tied up any loose ends during the summer; and by the time the new school year started in September, the school was completely up and running.” Woodvale Construction was also responsible for the new road outside the school.

“We weren’t allowed to finish the road until the ‘Gas to the West’ contract came to Omagh. The road was closed for almost 10 weeks so trying to ensure the school next door wasn’t disrupted too much was a challenge. We ended up handing over the school in two phases. We managed that successfully and the school opened on time and on budget.” With extensive experience in the education sector, Woodvale Construction was more than able to deal with any challenge that cropped up during this project.

“I would say that removal of the spoil under harsh conditions and trying to meet the very tight deadline were the biggest challenges we faced during this project. We’ve worked on a lot of schools over the years so we’re well used to dealing with any challenge that might crop up. We’re delighted to have been associated with Omagh Integrated Primary School. It has become a focal point for our local community and more importantly, the staff and kids love it!”

JP Corry supplied only the highest quality products to Woodvale Construction, the main contractor on the Omagh Integrated Primary School project. Approximately 250m of 75mm aluminium downpipe and hopper heads was selected for the project and delivered by JP Corry. All products supplied were specially powder coated to RAL 7016.

“Woodvale Construction has worked with us on several other projects and so were very confident that we would supply not only the highest quality products but would deliver them to site as and when required,” said David Patton, Specialised Rainwater & Drainage Sales at JP Corry.

With a strong network of 17 branches across Northern Ireland, JP Corry prides itself on supplying everything from core building es- sentials right through to the latest product innovations from leading suppliers.

Steel Lintels Ireland Ltd specified and supplied Catnic lintels to this prestigious project. The company’s technical team reviewed the architectural and structural drawings and specified the lintels to suit the applied load and wall construction.

Catnic lintels offer many benefits to specifiers and builders through their design, thermal efficiency and corrosion protection. The Catnic lintels were supplied on time, ensuring that the build programme was met. “It was a pleasure for Steel Lintels Ireland Ltd and Catnic to work with Woodvale Construction on this project,” said Barney McConville.

McSorley Welding’s expertise was called upon when it came to the supply and fitting of galvanised steel fencing at Omagh Integrated Primary School. The experienced firm was also tasked with supplying and fitting the vehicle and pedestrian gates at the new school.

The family-run business has been operating for over 22 years and is well known in the local area for its high quality workmanship. The company specialises in gates, railings, fire escapes, light structural steel, security grilles, on-site welding and also offers bespoke made-to-order products. Castlederg