On  December 23, 1895, the Grand Opera House in Belfast opened its doors for the first time. Over the years the building has undergone several bouts of restoration works, the last taking place in 1980 when the Theatre was saved from demolition. This time around, the Grand Opera House Trust was given a grant of £242,700 from the Heritage Lottery Fund for restoration works totalling £11 million. 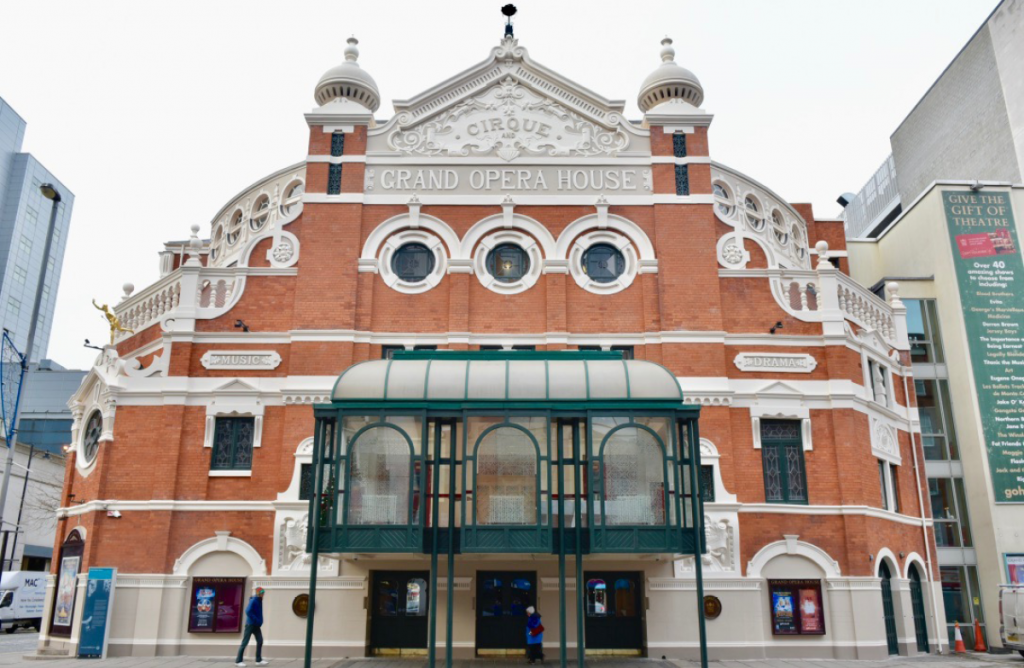 Patrick F O’Reilly Limited was appointed to oversee the restoration, cleaning and painting of the Opera House and together with Consarc Design Group, embarked on what they initially thought would be a straightforward project. The façade, which is built of brick and cast stone, features a mix of ornamental elements including decorative columns and oriental style onion-domes and minarets. All of these had to be expertly restored, cleaned and repainted and it was only when work began that the extent of the repairs that were needed became clear. A team of skilled specialists were also appointed to carry out the very precise complicated work that was required.

That team included Clarke Restoration, Oakridge Carpentry and Joinery Limited, McCrory Access and D Harkin and Co Roofing Limited. Disrepair that became evident once the team at Patrick F O’Reilly Limited began stripping the existing coatings meant extra time had to be allotted to the works.

“There were quite a few elements of the building that were in need of repair such as the windows, timbers and dome at the top. We knew that the building had suffered a lot over the years due to the surrounding areas being bombed but we couldn’t have known the full extent of that damage until we began the works. We were given an extra 10 weeks to complete the project as the cut-off was the pantomime season. Through close collaboration on site and sheer hard work, we met the deadline. We also completed the job under budget,” said Peter McParland at Patrick F O’Reilly Limited.

A significant amount of specialised, complicated work was required to ensure the project was completed to the highest possible standard. Two joiners were employed full- time to restore the bullseye windows and a stonemason was also taken on to carry out repairs to the stonework.

“The dome at the top also had to be dismantled and repaired. It was tilting to one side, possibly due to damage from explosions over the years,” added Peter.

A traffic management plan and a pedestrian management plan were implemented to ensure health and safety regulations were adhered to, something which Peter and the team were cognisant of throughout the process. Water damage was also an issue with the windows and the roof.

“A lot of the roof tiles had to be replaced along with the guttering. This was all due to wear and tear and water ingress,” said Peter.

Peter and his team also fully restored the Theatre’s iconic statue of Mercury which is situated on the corner of the building. Thanks to a private donation, the statue has been gold leafed and once again shines bright above Great Victoria Street.

“We felt that, when we were doing the job, we needed to do it properly so that’s why it was important to restore the statue to its former glory.”

Although restoration work isn’t something Patrick F O’Reilly Limited carries out on a regular basis, a few previously completed projects stood the firm in good stead. “We’ve completed a small number of projects like this but it would be true to say the Grand Opera House was definitely a learning curve for us. There was so much specialised work to oversee.

We also had to ensure our sub-contractors finished their portion of the project to the highest standard possible.” The biggest challenge was completing the project before panto season kicked off. “This was the most extensive external refurbishment the building had undergone in 50 years so we were committed to making sure the finish was top quality. This restoration really was a labour of love; we went to bed with it and got up in the morning with it. We’re very proud of the end result – it really is a spectacular building.”