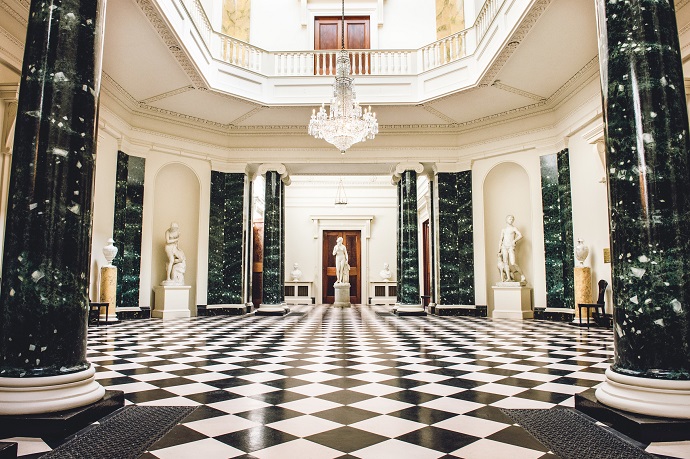 It has been a set for Hollywood movies, the home to some of Northern Ireland’s richest people, and now Mount Stewart, County Down has been named the UK’s outstanding building conservation project by the Royal Institution of Chartered Surveyors (RICS).

Over 90 of the UK’s most impressive property schemes battled it out for top honours at the 2016 RICS Awards Grand Final last night, where the £8million project to restore Mount Stewart to its former glory came away with the prestigious Building Conservation accolade.

Mount Stewart, just outside Newtownards, is an 18th Century house with major historical relevance, able to lay claim to housing the World War II war cabinet and being a residence for Royalty.

H&J Martin Construction & Fit Out, part of the Lagan Construction Group of companies, undertook the restoration of the building on behalf of the owner, The National Trust. Other members of the project team included Elphick Design and RJN surveyors.

Mount Stewart won the Building Conservation award in the face of stiff competition from projects across England, Scotland and Wales, including Cardigan Castle, a Hampton Court Palace project, and the Garden Building at the University of Oxford.

In a great night for Northern Ireland’s built environment, the SPACE People’s Park in Portadown – a £5.5m project to refurbish Portadown Peoples Park and Tunnel Area – also claimed a Highly Commended accolade in the Community Benefit category. The developer/contractor on this project was Fox Contracts while the surveyor was Edmond Shipway and the landscape architect was The Paul Hogarth Company.

The RICS Awards Grand Final – hosted by Gethin Jones, Broadcaster and TV personality and held at The London Hilton – celebrates the UK’s most inspirational initiatives in the land, property and construction sectors that have added real value to the communities they serve.

Praising the Mount Stewart project, RICS judges said, “Mount Stewart has undergone several phases of development through time and each phase was undertaken with aesthetic in mind over structure. Significant structural issues and water ingress had become evident, rendering several areas of the building dangerous, unusable and a threat to valuable paintings.  We were impressed by the highly innovative solution to strengthen floors and beams by tensioning, using standard components and having minimum impact on the historic floor structure and services.  Once areas were repaired, careful research ensured the building’s decorative scheme was faithfully reproduced as it was when Lady Londonderry’s home. The Judges were further impressed by the clear collaboration in pioneering the approach of undertaking the works whilst maintaining the building open to the public with the highly successful outcome of increasing visitor numbers and visitor experience.”

Category winners from each of the 12 regional RICS Award ceremonies – held earlier this year – competed to win the national accolade in their respective category, with the eight Grand Final winners as follows:

A number of Highly Commended certificates were also awarded to schemes across the UK that had demonstrated excellence:

Chair of the RICS Awards Grand Final judging panel, David Tuffin FRICS of Tuffin Ferraby Taylor LLP, said, “Judging the Grand Final is always difficult for our judges as each of these schemes is of an exceptional calibre, having won a category award in their regional RICS Awards heat. I’d like to extend a huge well done to the teams behind the schemes that won, or were highly commended in the Grand Final as these projects are all positively contributing to their local communities and the economy.”

For more information on the RICS in Northern Ireland, visit www.rics.org

Snickers Workwear – Trousers Made to Work, Together with you