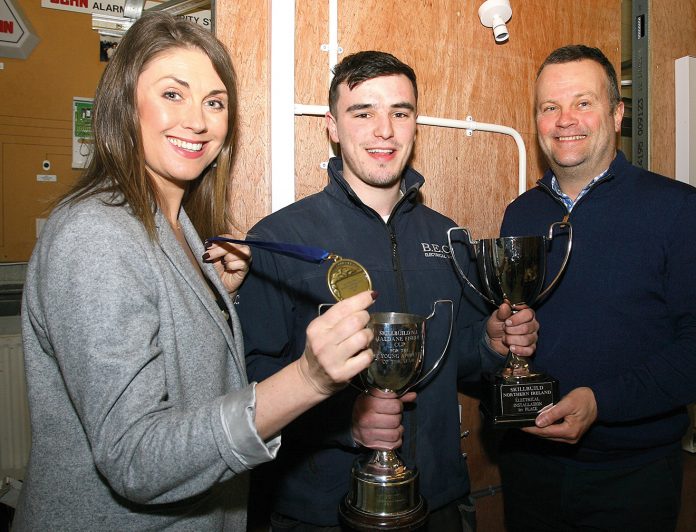 Over 80 local construction apprentices gathered their tools to compete against each other in the annual Skillbuild NI National Finals, held at Belfast Metropolitan College, Castlereagh, on March 22.

Skillbuild NI, organised by CITB NI and supported by the Department for the Economy and local sponsors, helps assist with maintaining and raising the status and standards of professional and technical education and training.

The competition is held annually each spring, with many winners progressing further to represent Northern Ireland at World Skills UK Live and, potentially, at WorldSkills. It is also supported by local construction employers who sponsor each trade category.

The Skillbuild NI competition is designed to test skills, technique and ability within tight timeframes in order to win coveted titles in 10 different trades ranging from brickwork to wall and floor tiling.

Maurice Johnston, Chairman CITB NI, said, “CITB NI is proud to have been involved in construction skills competitions for over 40 years and we have a record of success at skills competitions not only on a local level but also on a regional, national and world level.

“Skillbuild NI is a great opportunity to showcase and celebrate the high level of skills we possess and the impressive talent of our workforce. It reflects the high standards of training in our colleges and the commitment to excellence demonstrated by the competitors.

“Congratulations to everyone who has taken part and those who have excelled in their trade. Skillbuild NI couldn’t happen without the support of the local sponsors and the training network, and we extend our thanks to all who have helped the apprentices to be able to compete at this competition. “Our young people are more ambitious now than ever and we hope that Skillbuild NI National Finals will be part of their journey and future careers within the construction industry.”