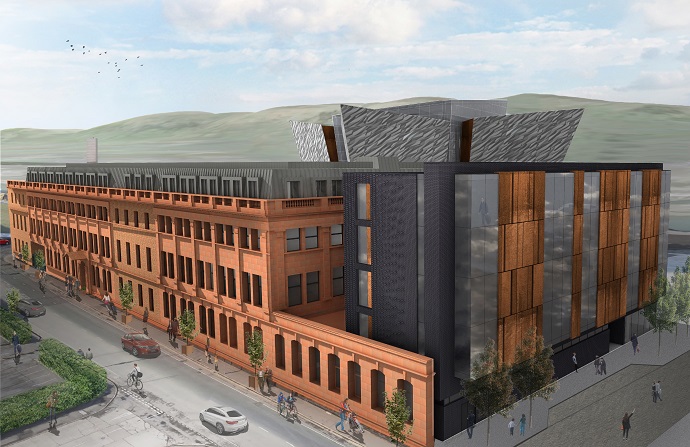 Situated in the former Harland & Wolff headquarters and historic Drawing Offices, the £28m hotel is bringing over 75 new jobs to the city and is being restored and operated by the Harcourt Developments team with a £5m investment from the Heritage Lottery Fund secured by the Titanic Foundation towards the Drawing Offices. Over 230 people were employed by Harcourt during the hotel construction.

The Architect on the project is Robinson McIlwaine Architects LLP and the main contractor and project manager is Abercorn Construction Limited. RPS is the Consulting Engineer, the M&E Engineer being Renaissance Engineering Limited and Consarc Design Group is the Specialist Consultant.

33 apprenticeship positions for students, trainees and the previously unemployed were also fulfilled during construction.

The luxury hotel will boast 119 rooms all with spectacular views of Belfast’s rich shipbuilding history from the Harland & Wolff cranes to the east to Titanic Belfast and the slipways to the west.

As the most authentic hotel to honour the work of Harland & Wolff and the majesty of Titanic, rooms for opening week are almost sold out with visitors from all around the world flocking to immerse themselves in the legacy of Queen’s Island.

John Doherty, Group Creative Director at Harcourt Developments, added; “History and heritage helped build this hotel, and it can be seen in every aspect of the finish, from the carpet to the cornices. We are working with the Heritage Lottery Fund and the Titanic Foundation to ensure Belfast’s illustrious shipbuilding legacy is told in true style.”

“The hotel will also tell the story of the people who made the industry here in a way that no other destination could. Over the past five years the Titanic Foundation has welcomed over 50,000 people to the Drawing Offices from the local community who have personal links to the heritage of the ship and headquarters. We could not have told this story without them.

“We look forward to opening the doors on the 10th September so everyone can come to Belfast and experience the uniqueness of Titanic Hotel Belfast for themselves.”

The distinctive arching Offices have been kept completely intact, with the original moulding restored, which was crafted by the same men who built Titanic. Reclamation is at every corner, from floor tiles to wall tiles, most of which were restored from the main building. Of special interest are the original tiles surrounding the main bar, which are identical to the tiles used for Titanic’s swimming pool.

The investment from The Heritage Lottery Fund supports the expert conservation and interpretation of the Drawing Offices and heritage features of the building, ensuring an important level of public access to these areas for years to come.

Kerrie Sweeney, CEO Titanic Foundation Ltd., commented; “We are nearing completion on this exciting heritage project and it is fantastic to see the historic and the new come together. The regeneration of the Harland & Wolff Headquarters and the Drawing Offices has been fascinating to watch.

“The funding from the Heritage Lottery Fund has been vital in ensuring those small features that tell hugely historical stories are restored and give the local community and visitors from around the world a genuine piece of our shipbuilding history.”

When open, Titanic Hotel Belfast will also host public-access tours of the main Drawing Offices starting with a six-week free exhibition that will tell the story of the building. Half a dozen key heritage rooms within the hotel, including Lord Pirrie’s Office and the Presentation Room*, will be open to the public tours displaying artefacts and details of the restoration works and history weaved into the décor.

Paul Mullan, Head of the Heritage Lottery Fund Northern Ireland, added: “It is thanks to National Lottery players and the £5m raised by them that this hugely important building has been restored and returned to sustainable use.

“The Heritage Enterprise programme has been specifically designed to support ambitious projects such as this where the costs of restoration would be so high that it would not be commercially viable.  So it is wonderful to see the final elements coming together on what will undoubtedly be another world-class maritime and industrial heritage attraction for visitors to Belfast’s Titanic Quarter.”

As well as deluxe accommodation, the hotel will hold seven private event spaces making use of the offices of Thomas Andrews**, Lord Pirrie*** and Mr Charles Payne****, some of the most influential figures of Harland & Wolff and the design of Titanic. Drawing Office 1 can hold up to 250 guests for larger functions.

The 166-seater dining room will serve up first class fine dining dishes made of locally sourced ingredients while the bespoke cocktail bar is where guests can sip on some of the freshest serves.

Titanic Hotel Belfast will open to the public at 12pm on September 10, 2017. For a preview, visit www.titanichotelbelfast.com.

*The Presentation Room: This is where the deals were done, a decadent space where managers and directors sold their skills and products to the industry.

**Thomas Andrews was the managing director and head of the drafting department of Harland & Wolff from 1907. In 1908 Andrews began work on the Olympic and Titanic and when Titanic set sail in 1912 he was on board. Andrews spent the last hours of his life saving passengers, encouraging them to get on lifeboats, with his actions being called heroic. He perished with the liner.

***Lord William James Pirrie (1st Viscount Pirrie) was the uncle of Thomas Andrews, and chairman of Harland & Wolff between 1895 and 1924. Lord Pirrie also served as Lord Mayor of Belfast between 1896 and 1898.

**** Charles Payne was Managing Director of Harland & Wolff at the time of the launch of Titanic.