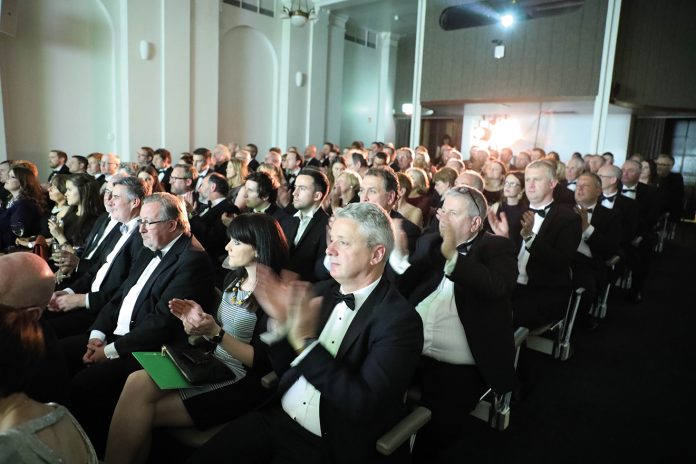 The prize for Northern Ireland’s House of the Year went to McGonigle McGrath for their House at Lessans, just outside Saintfield. McGurk Architects and ARdMackel won an award for Raidió Fáilte – Lionra Uladh, a new facility for the radio station which serves the Gaelic speaking community across Ulster. The building which includes a café, exhibition space and garden brings ‘front door’ activity back to Divis Street in Belfast. Raidió Fáilte also won the Client of the Year for their enthusiasm and energy.

The final award went to Grimshaw Architects for Belfast City Quays 2. It is the second speculative commercial office building by Belfast Harbour Commissioners as part of a wider development of Belfast Harbour around Clarendon docks. The £15m building provides eight stories of flexible workspace and, due to its excellent energy performance and local sourcing. It also picked up the Sustainability Award.

Other shortlisted projects that did not win an award: 65-67 Fitzroy Avenue by Studio Rogers, Killyleagh Castle by Alastair Coey Architects, The HMS Caroline, Thompson Dock Pumphouse and Alexandra Dock by Consarc Design and Number 50 by McGarry Moon.

McGONIGLE McGRATH FOR HOUSE AT LESSANS, SAINFIELD
House of the Year, Small Project of the Year

About: A beautiful new house sits within a carefully orchestrated architectural ensemble formed of an existing barn, a new fore court, a discrete bedroom block with private courtyard and expansive living spaces which look out onto a wonderful green rolling landscape.

Judges said: “The architects have shown remarkable restraint and skill in creating a family home that exudes calm, dignity and generosity. The house belies any notion that an expensive budget is somehow the gateway to excellence.”

About: A remarkable project in a very demanding location, adjacent to the busy Westlink at the junction with the Falls Road. It is brick externally with gold anodised perforated sliding screens which close the building up at night. During the day the screens slide to reveal a popular café on the ground floor.

Judges said: “The enthusiasm and energy of the client is infectious and characterises this project. There was a recognition by the client of the value and role of good design in creating a facility that not only functions well but sends out a positive message and invitation to the broader community.”

About: The building addresses the dock edge with commercial units at the ground floor thereby adding activity and colour to the waterfront walkway.

Judges said: “This project is enlivened by the skill and enthusiasm that the architects had brought to this ubiquitous brief. They were assisted in this ambition by their client, Belfast Harbour Commissioners, who understood the potential of this particular site on the waterfront.”