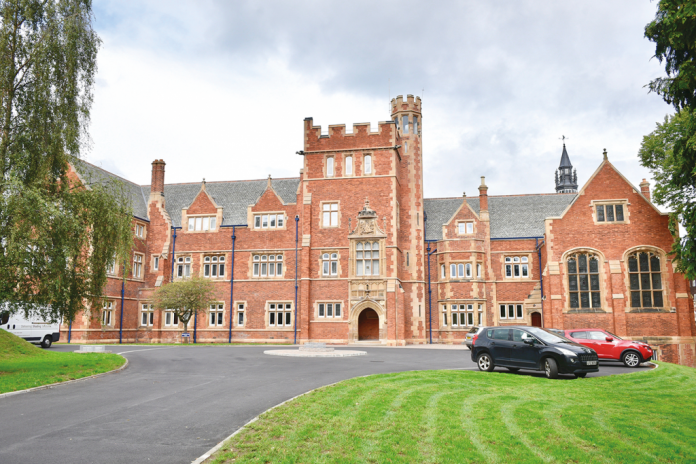 Although Paul Devine and the team at Woodvale Construction knew that the refurbishment of McArthur Hall Methodist College would be a tricky job, it wasn’t until the contractor got stuck in that they realised just how complex it would be.

The project consisted of the refurbishment of a Grade B Listed building which originally had been used as a dormitory building for boarding students. Woodvale Construction was tasked with the extensive repair of McArthur Hall, a job which would stabilise and prolong the life of the building, address various health and safety risks and essentially bring it back to life as a functioning part of the College. With several heritage projects under its belt, Woodvale was the perfect construction firm to take on this challenging project. The fact that much of the building’s interior was also Listed presented Woodvale with very specific challenges.

“Before starting any work, we carry out an extensive survey to ascertain what needed to be protected. Once that was done, we were able to carry out the non-structural demolitions which allowed us to assess the state of the upper floors,” said Paul Devine, Contract Manager at Woodvale.

A significant discrepancy in floor levels required additional specialised work – “There was a springiness to the upper floors so we had to carry out a lot of work in order to bring some structural integrity into the floors while still protecting the ornate ceilings below us. It required very specialised work – we had to attach the listed ornate ceiling to the existing joisting using a resin bound fibreglass adhesive. We then bolted new secondary joists to add stability and help deal with the floor finish level issue.

Additional steel beams tied and further supported the floor and finally we incorporated fire and acoustic measures within the floor make-up to meet DE and Building Control Regulations. What should have been a fairly straightforward task turned out to be an extremely complex job.”

Woodvale also introduced an atrium area whereby the original building was wrapped around a courtyard. Demolition work in the internal courtyard has created a new stairwell access area, wrapped around on three different levels by a connecting corridor which has brought the entire outside area into use and flooded the building with light. Specialist stonework mosaic repairs to the front entrance porch were also required.

“We ended up taking it off-site for repair work. It was in extremely poor disrepair but we managed to reinstate it and integrate it with the new ceramic tiles in the courtyard.”

A host of specialist sub- contractors were employed to carry out traditional building tasks such as carving and lime pointing. The project also included restoration of stained glass features, parquet flooring, exterior brick and stonework and re-roofing.

Another major challenge was the requirement for mechanical ventilation in every room of the building. This involved snaking extensive cross-section duct work from the plant room right through the entire building, including listed protected arches, walls, floors etc.

“The amount of temporary structural work needed to achieve that was immense. A huge amount of coordination between all teams on site was required to make that happen, especially as we weren’t allowed open the windows!”

As much of the original building material as possible, including roof slates, gutters and downpipes, was re-used. A lead tower which sits atop the College was in need of extensive repair.

“All the lead had to be stripped off. We had one of the top guys in the country working on it; he spent at least 2,000 hours on the lantern. With a project like this, you take great pride in seeing old trades being reignited. Watching the stonemasons applying their very particular expert skills, along with the other specialists, was a great privilege.”

Paul credits Site Manager Dermot Corrigan with maintaining an excellent relationship with the College throughout the build. “Dermot was key to the relationship we still have with the College. Eoghan, our student engineer, was also a great help to Dermot while Darragh McGlone was a great man to keep on top of the purse strings at Woodvale. This was a great project to have been involved in.”