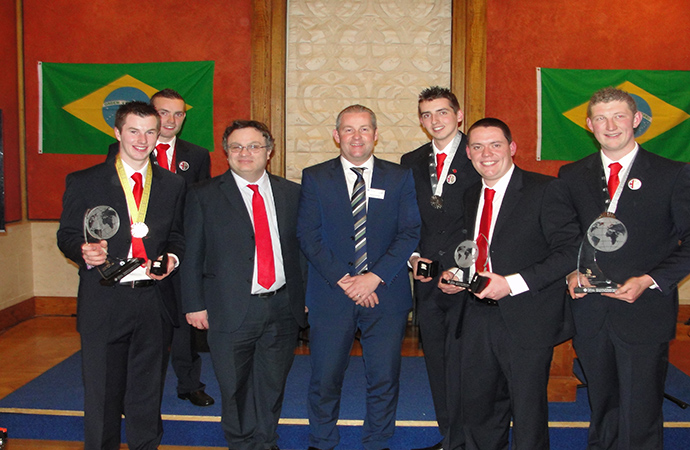 The Minister congratulated the seven Northern Ireland competitors, four of which represented construction sectors who achieved Northern Ireland’s best ever WorldSkills result winning a gold medal, two silver medals, a bronze medal and a medallion for excellence representing over forty per cent of the overall UK medal haul.

Speaking about their success the Minister said, “These young people deserve the highest praise for being selected to represent the UK in their particular skill on the world stage. They have proven that they are world class at what they do and should be rightly proud of themselves for competing against the best of the best from across the globe. This is an outstanding achievement not only for the young people, but also for their families, employers and trainers who have supported them throughout their training and during WorldSkills. Without your commitment to these young people we wouldn’t see success on the scale we are celebrating this evening.”

Barry Neilson, Chief Executive of CITB NI said, “I would like to extend our congratulations to the Northern Ireland representation in WorldSkills Team UK in particular those representing construction trades all of which have come through the Skillbuild NI competition and have won medals showcasing their skills in their trade on both a regional and national level. This level of training through the college network and recognition through Skillbuild NI has allowed the competitors to further their skills in order to compete at World level.  Skills are a key driver of growth, performance and prosperity and even more important now as the construction industry is finally experiencing shoots of growth after several tough years in economic decline. We at CITB NI are proud that through our Skillbuild NI competition we have helped train our young people to not only be the best in their trade but also the best in the world.”