How did you become a stonemason? I was farming cattle up until my early 30s, but I’ve always had an artistic yearning – the desire to create something beautiful. When my late father, John, dared me to build two stone pillars at my house, I laughed at him at first, but then decided to give it a go.

Those first two pillars were terrible! I’ve since knocked them down and started from scratch. But a few people saw what I had done and asked me to do some small stonework jobs for them, and it snowballed from there.

I was suddenly earning more from building than farming. It was never about the money, but it seemed to be a better idea to spend my time doing something I really loved. I still have some cattle, but nothing to the degree I had before. I’ve been full time on the stone for three years now.

I learnt everything the hard way, by myself. But you do learn fast. The chiseling skill all comes with practice. The main thing is having an eye to know what looks good. You either have that ability, or you don’t.

What’s the hardest part of the job?
Physically, it can be very demanding. I try to keep myself as fit as possible by lifting weights and doing a lot of cardio. My friend, who is also a mason, started yoga to help his back, so I might try that next! The weather can be tough, but you just need to be properly prepared for it. In the cold weather I wear thick gloves, leggings under my jeans and several vests. I even decided to grow a beard to keep my face warm this winter!

I don’t stop for rain. I just nail a tarp to the wall and work under that. If you didn’t work when it rained, you’d never work at all! I love getting my hands dirty, and the physicality of the work. 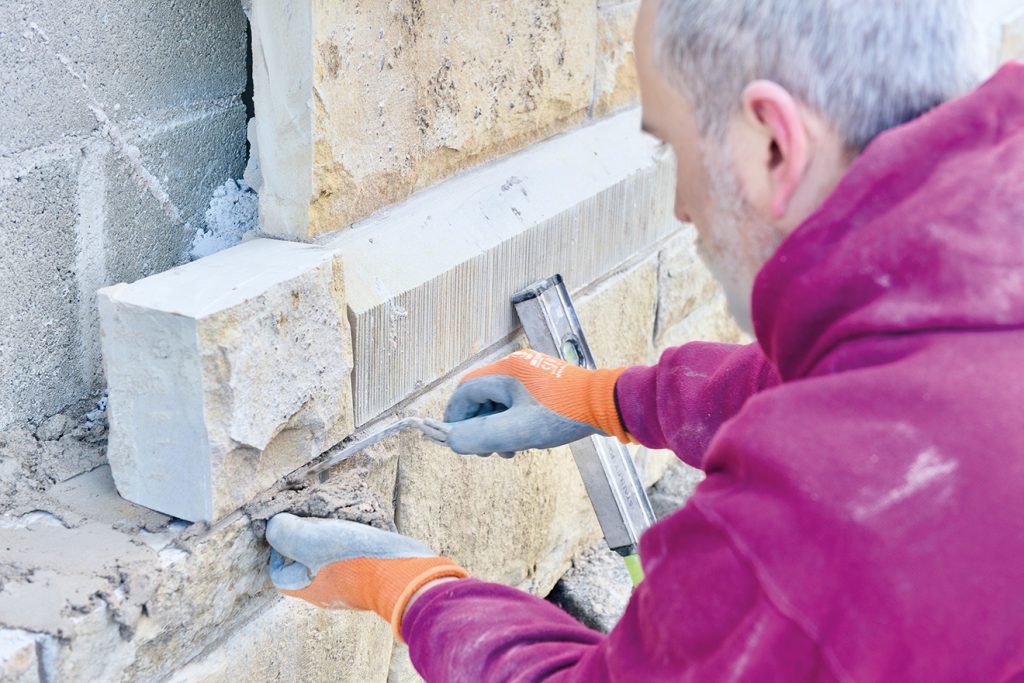 You clearly have a passion for your craft, why is that?
It’s a lovely job. You know that what you have created will be there for a hundred years at least. Maybe my grandchildren will see it, and their grandchildren. It fills me full of pride. My great-uncle Johnny was a stonemason. He died when I was very young, but the houses he built are still standing and lived in. That sense of continuation and connection between past and future appeals to me, and I’m proud to carry on our family’s stonemason tradition.

There’s also some kind of pull from stone – I don’t know what it is. My middle daughter, who is five, loves to collect stones. Maybe she’s got the stone bug too!

How do you approach a new project?
I never take a job on for the money, it’s more about the challenge to myself. I’m more interested if it’s a stone type I’ve not worked with before, or if it’s something I’ve not built previously. Once the project is agreed with the client, I’ll source the stone from quarries or reclaimed stone from old barns, houses and walls. Next, I’ll get on site, look at it, try to talk myself out of doing it and then before you know it, it’s finished! The second job I took on was a 100m2 house facade – I was out of my depth. It took every inch for me not to turn the job down. But I stuck at it and got it done. Every house is different, they all have their individual challenges – but I don’t have that fear any more. 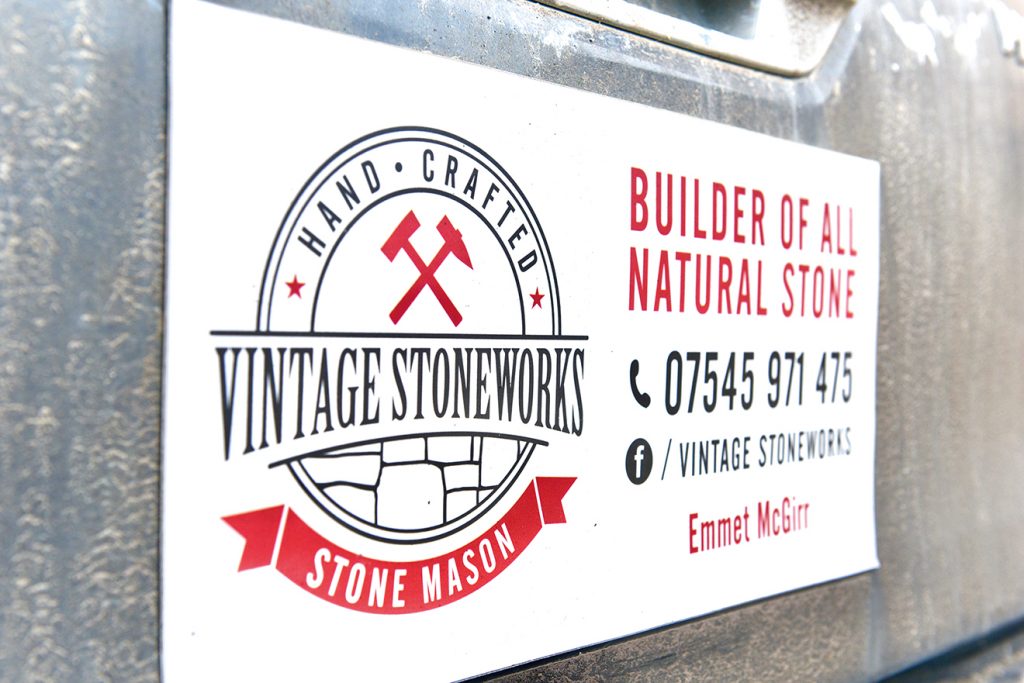 What is your stonemason style?
I’ve built a reputation for working in random rubble. A lot of masons would cut them into squares and rectangles with their chisels. I don’t, I try to keep the original shapes, which takes longer to jigsaw together. I’ve always been arty, so I’ll draw a sketch of what I want the wall etc. to look like and I’ll work off that sketch. I use Tungsten-tipped chisels and two Tungsten steel hammers. I had to buy the hammers especially from the USA, but they should last me for the majority of my career.

Do you have a favourite type of stone?
I love stone that looks like it shouldn’t be there. Anything that’s a strange shape that I can build around. Sandstone is great for that. Sandstone, limestone, quartz – they’re all great to work with and suit different types of houses. Donegal slate works well with modern buildings, it creates a kind of industrial look For more traditional style houses you can’t go wrong with sandstone.

How has masonry changed in recent years?
There are many more masons around and this has raised standards across the board. Previously, around 10-15 years ago, a lot of walls were just thrown up with very little care taken. I’ve worked on three remedial jobs in the past two years in which I had to take down the walls and start from scratch. Some of those walls were just five years old.

Today, clients are looking more for quality than speed. They want results that will last for more than a lifetime.

There are five really good masons within an hour’s drive from me and we all get on really well and keep our standards high. Masons are quite a relaxed bunch of folk. A lot of us are failed artists or musicians so we’re all quite laid back! There’s a great sense of camaraderie between us, and we often pass work on to each other. 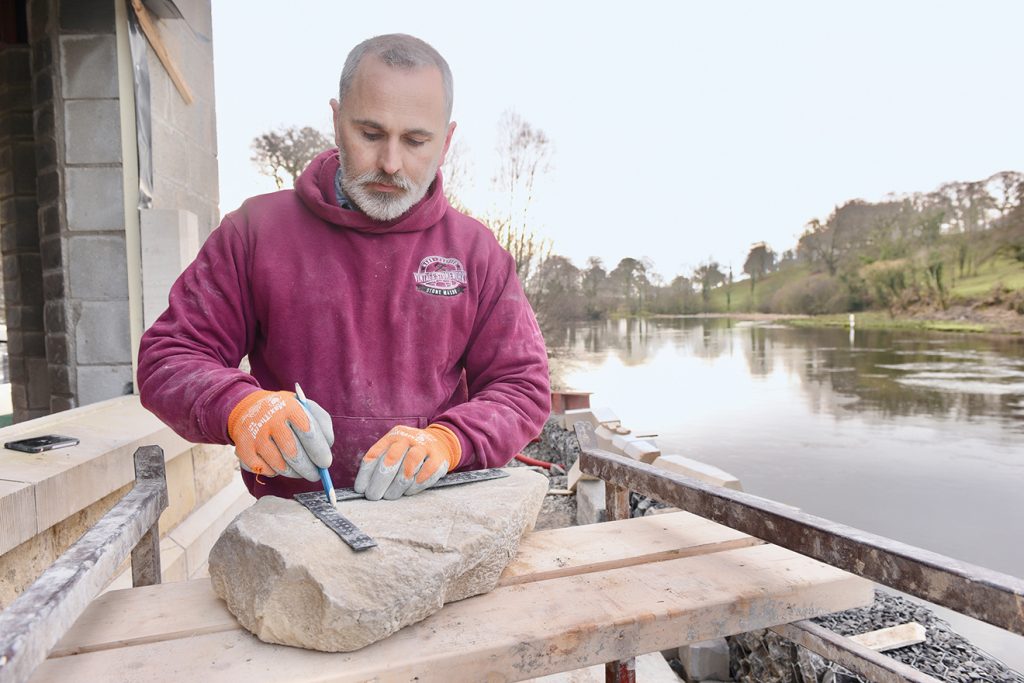 What job are you working on, right now?
I’m working on my largest house project so far – a 250 m2 house on the banks of the River Erne, Enniskillen. It’s going to be something really special, built from large Donegal sandstone – 4 ft long x 2 ft high stones. The house style will resemble an old Georgian house from Cornwall and will include a string course, plinth and polished corner stones.

I’ve taken on two labourers for the first time so we should be finished on-site in around 3.5 months. Big stones cover a lot of space in a shorter period of time. After that I’m moving on to another house, which will take around 4-5 months. It’s a similar size but with smaller bagged stone. I’ll have to really take my time with it because it will be a dry joint. You won’t see any mortar at all.

I’m fortunate that I have work all the way up to Christmas.

Do you just work on house building jobs?
No, not at all. Houses are my core projects but I’m lucky to have worked on a variety of interesting jobs.

Last year, I built a large gable wall with a clock inset. I built a sundial around the clock using reclaimed brick from the previous old house that had been on that site for 300 years. It was satisfying to reuse and repurpose the original fabric of the building.

For another job, I built a 20ft high fireplace – all dry joints. I take photos of my jobs and post them on my FaceBook page. When I posted that project image it got attention from around the world – it was unbelievable!

So, is it time to give up the farming for good?
I’ll always keep a few cattle, in memory of my dad. He farmed all his life, but sadly passed away last year. If it weren’t for him I would never have started as a stonemason. I know he’d be happy that I was pursuing a career in something I really loved, but there will always be a few cows around here – I never want to lose that connection with him.